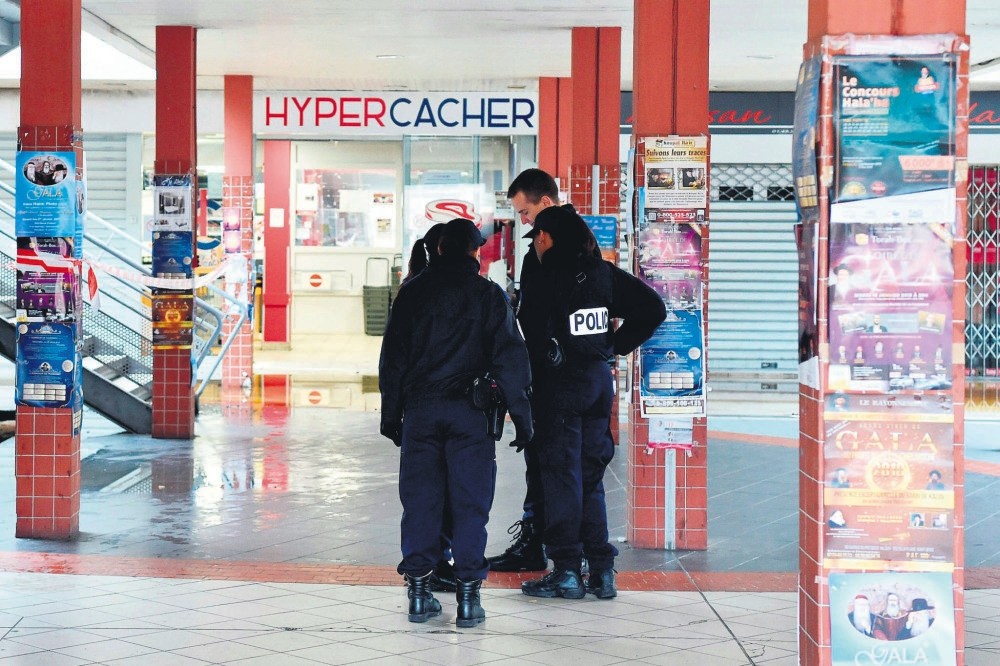 French police stand outside the French kosher grocery store in Creteil, south of Paris, Jan. 9.
by Compiled from Wire Services Jan 10, 2018 12:00 am

A suspected arson on a French kosher grocery store has revived fears of anti-Semitism, three years to the day since an assault on a Jewish supermarket in 2015

On the third anniversary of the Jan. 9, 2015 attack at the Hyper Cacher kosher supermarket in eastern Paris, a suspected arson attack yesterday on a French kosher grocery store revived fears of anti-Semitism in the country.

Prosecutors said the store in the southern Paris suburb of Creteil caught fire in the early hours, days after it was vandalized with anti-Semitic graffiti. ;

A source close to the police probe said it was "too soon to discuss motives" though Beccuau said investigators do not believe the fire was an accident. The store was completely gutted in the fire, with the shelves along the aisles – where the fire is believed to have been started – blackened and charred, an AFP reporter said.

The Promo & Destock store, whose owner is Muslim, was one of two neighboring kosher shops in Creteil that were daubed with swastikas last Wednesday, signaling rising anti-Semitism along the lines of the discrimination felt by Muslims. The second store was also slightly damaged in the fire.

Creteil counts some 23,000 Jews among its 90,000 residents, according to community leader Albert Elharrar who said Jewish groups believe the shops were deliberately targeted at the time of commemorations for the 2015 attacks.

"There's a link between the graffiti and the fire," he told AFP. "It's clear that they came for no other reason but to attack a kosher shop on the day of the commemorations."

The number of anti-Muslim and anti-Semitic incidents in France has soared recently as French authorities draw attention to the diminishing space of tolerance in French society. France is home to Europe's largest Jewish population, estimated between 500,000 and 600,000.

There are at least 3.5 million Muslims in the country as well, representing approximately 6 percent of the total population of 58.5 million. The Charlie Hebdo attack in 2015 prompted fears among many French Jews, as more Jews consider fleeing to Israel due to growing security concerns.

A record 7,900 French Jews emigrated to Israel the year of the Hyper Cacher attack, many of them citing increased fears over anti-Semitism. Though the exodus has since slowed, a string of anti-Semitic crimes have continued to worry France's large Jewish community.

Former Prime Minister Manuel Valls told Europe 1 radio that more needed to be done to tackle anti-Semitism, which he said had become "deeply rooted" in France.

"What has changed over the past three years is the awareness of this level of anti-Semitism," he said.

Valls said French society had failed to mobilize in support of Jews following attacks such as the 2012 shooting at a Jewish school in Toulouse in which four people were killed, three of them children.

"These are crimes that must be prosecuted and condemned, we need to do more," he said.