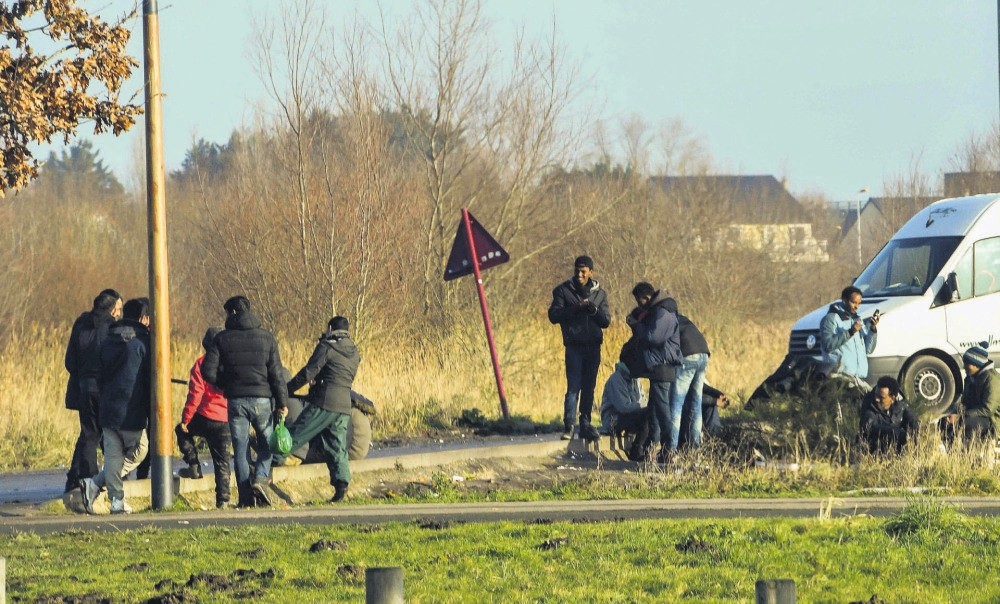 Migrants gather near a truck parking lot close to the N216 highway that leads to the ferry terminal, Calais, Jan. 12.
by Compiled from Wire Services Jan 16, 2018 12:00 am

After a migration crisis and the Brexit vote to leave the European Union, the border arrangement over Calais is still a source of friction between the U.K. and France

Amid the ongoing border arrangement row, French Interior Minister Gerard Collomb said he wanted London to shoulder more of the costs of dealing with migrants hoping to cross to Britain from the port city of Calais.

In an interview with Le Parisien daily published Sunday, Collomb said he would push to modify the Touquet accords signed in 2003, which effectively moved Britain's border with France to the French side of the English Channel. His comments indicated Macron has dropped a campaign promise to renegotiate the Le Touquet accords in full. The deal will be on the table on Thursday when President Emmanuel Macron holds talks with British Prime Minister Theresa May at an Anglo-French summit in southern England.

"We're still negotiating. There is back and forth. Nothing is locked in yet. The British have shaken on nothing but there's a lot of pressure on them," said the official familiar with Collomb's thinking, as reported Reuters.

If no deal can be struck, France could tear up the Le Touquet accords and the two countries would have to reinstate borders on each side of the channel, the source said, adding that this was not in the interest of either side.

"Our understanding is that they will pay more. The question is how much and for what," said the source, adding that the two sides are in daily contact ahead of the summit. "We have let them know of our needs and a figure, we're talking tens of millions of euros."According to the historic border agreement, dubbed Le Touquet accords signed in 2003, British security controls have been stationed at the French border and immigration checks are carried out in French ferry terminals in the northern French port city of Calais. The agreement also allows French border officials to check the documents of migrants in Dover, across the channel. While Britain wants to retain the border deal, France wants border controls to take place in the U.K., instead of carrying out immigration checks in Calais.

Some pro-Brexit lawmakers from Britain's ruling Conservative party have branded suggestions London pay more as "absurd." "We work closely with the French authorities at all levels to reduce migrant pressures and target criminal gangs involved in people trafficking, both in northern France and further afield, a spokesman for the British Home Office said.Calais has borne the brunt of the migration crisis in France and at its peak up to 10,000 migrants squatted in a sprawling camp dubbed "The Jungle," before former president Francois Hollande sent in bulldozers. The "Jungle" has become a symbol of the Europe's biggest migrant crisis since the World War II and a major source of Anglo-French tensions.

Hundreds of migrants are stilled massed near Calais more than a year after the huge so-called Jungle camp was cleared by the authorities in October 2016. Collomb said about 400 people are now in the area, compared with more than 7,000 a year ago, and defended the government's efforts to find shelter and process asylum requests. "The ones sleeping outside don't want to present themselves, because they don't want to seek asylum in France," he said. Paris has complained that it shoulders too much of the financial burden and handles more than its share of asylum cases, while Macron said in 2016 before becoming president that there would be no migrants in Calais if the accord unraveled.