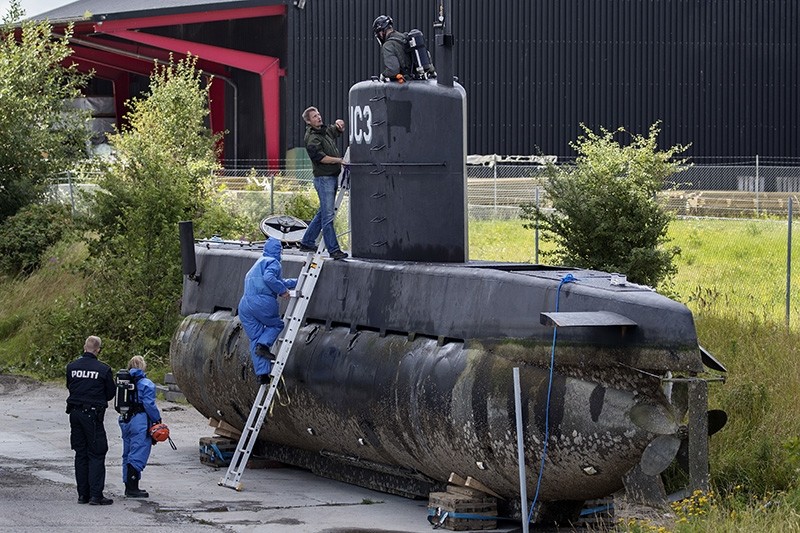 This is a Sunday, Aug. 13, 2017, file photo of police technicians board Peter Madsen's submarine UC3 Nautilus on a pier in Copenhagen harbour, Denmark. (AP Photo)
by Compiled from Wire Services Jan 16, 2018 12:00 am

Danish prosecutors will seek to have inventor Peter Madsen jailed for life for killing Swedish journalist Kim Wall on his homebuilt submarine in a premeditated murder, possibly by either cutting her throat or strangling her, police said on Tuesday.

Wall, a 30-year-old freelance journalist who was researching a story on the entrepreneur and aerospace engineer, went missing after Madsen took her out to sea in his 17-meter (56-foot) submarine in August last year.

Later that month, police identified a headless female torso washed ashore in Copenhagen as that of Wall, but the cause of death has not yet been established.

Madsen has been charged with the murder and dismembering of Wall along with a charge of sexual assault without intercourse of a particularly dangerous nature, police said Tuesday.

Police said in October investigators had found 14 interior and exterior stab wounds to the journalist's genitals.

Madsen has admitted to dismembering Wall on board his submarine and dumping her body parts in the sea, but he denies murdering or sexually assaulting her.

Investigators found a hard disk in Madsen's workshop that contained fetish films in which women were tortured, decapitated and burned alive.

Prosecutors said they would call for a life sentence against Madsen, which in Denmark averages 16 to 17 years before parole according to national statistics, though some convicts have been locked up much longer.

The full charge sheet will be made public on January 23. Prosecutors urged the media to exercise restraint in publishing details of the case.

"This is a very unusual and extremely brutal case," prosecutor Jakob Buch-Jepsen said in a statement.

"We hope the media will respect that further evidence in the case must be presented in court and not in the press," he said.

After intentionally sinking his submarine early on August 11 in Koge Bay, some 50 kilometers (30 miles) from the Danish capital, Madsen was picked up by a rescue vessel and initially told police he had dropped Wall off on land after their interview the previous evening.

He then went on to change his version of events several times.

Wall worked as a freelance journalist based in New York and China, and her articles were published in The Guardian, The New York Times and others.

She had written about the earthquake-hit ruins of Haiti, the macabre torture chambers of Idi Amin's Uganda, and Cubans using hard drives to access foreign culture.

At the time of her disappearance, she was believed to be working on a feature story about Madsen, an eccentric, well-known figure in Denmark.

The 47-year-old self-taught engineer has successfully launched rockets with the aim of developing private space travel.

He is known for his occasionally foul temper and fallouts with former colleagues.

His homemade submarine Nautilus, launched in 2008, was the biggest private sub ever made when he built it with help from a group of volunteers.

But they became engaged in a long-running dispute over the Nautilus, before members of the board decided to transfer the vessel's ownership to Madsen, according to the sub's website.

In 2015, Madsen sent a text message to two members of the board claiming: "There is a curse on Nautilus".

"That curse is me. There will never be peace on Nautilus as long as I exist," Madsen wrote, according to the volunteers.

Madsen's character is expected to be central to the murder case against him.

A verdict is expected on April 25.