Poland plays down row with Germany over WWII reparations 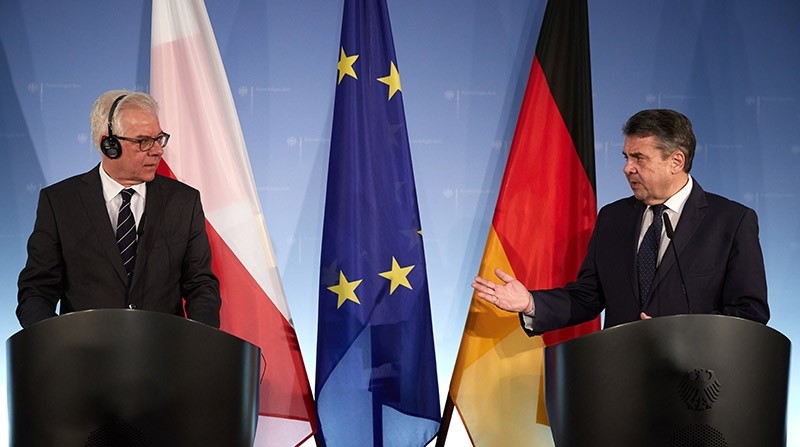 Warsaw on Wednesday played down a row with Germany over its demand for World War II reparations, with Poland's foreign minister saying the issue should not hinder good relations between neighbors.

"At the moment, there is no question of it becoming an obstacle standing between the relationship of our two countries," said Jacek Czaputowicz, in his first visit to Berlin since he was appointed Poland's foreign minister in a reshuffle last week.

"We are looking for solutions... This discussion should take place on the basis of experts," he said after talks with his German counterpart Sigmar Gabriel, adding that Warsaw is "open to discussions".

Poland's right-wing government ruffled feathers in Berlin when it revived in July the issue of reparations -- an issue that for years had been considered settled.

Germany has firmly rejected Poland's claims, pointing to a 1953 decision by the country's then communist regime to relinquish demands for compensation.

But Poland's nationalist Law and Justice (PiS) government disputes the validity of Warsaw's 1953 deal, arguing that it was made under the diktat of the Soviet Union.

PiS lawmakers set up a parliamentary committee in September tasked with looking into the scale of reparations they claim Germany owes, but did not set a deadline to publish their findings.

"We want to have this debate in Poland, it's important," said Czaputowicz, adding that "we have the right to know recent history and the communist period when Polish leaders were not allowed to make their own decisions."

Gabriel stressed that there is a "clear judicial position of the government in which there is no reason to talk about reparations".

But given that debate is raging about it in Poland, "if we seek to not ignore it from each side... then an idea could be to deal with the question scientifically," said the German foreign minister, while stressing that there is no concrete plan to put the issue to experts or historians.

During World War II, Poland suffered the brunt of a two-front attack by Nazi Germany and the Soviet Union.

Six million Polish citizens, including three million of Jewish origin, were killed under the Nazi occupation of 1939-45, and Warsaw was virtually razed.

The reparations controversy comes as relations between Berlin and Warsaw have been strained over a slew of justice reforms introduced by the PiS since it took power in 2015.

The European Commission last month launched unprecedented judiciary proceedings against the Polish changes, which Brussels says place courts under the control of the PiS government and threaten democracy.