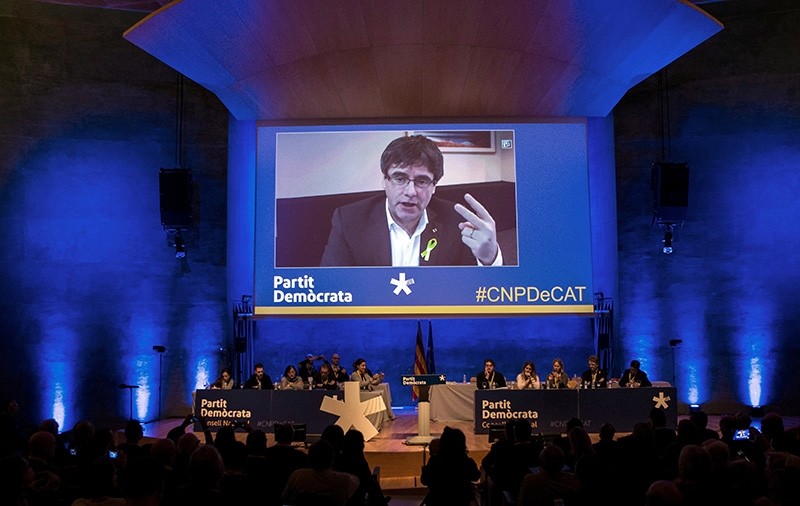 Former Catalan regional president Carles Puigdemont is seen on a screen as he delivers a speech during an act of pro-independence left-wing party Esquerra Repulicana de Catalunya (ERC) held in Barcelona, Catalonia, Spain, 13 January 2018. (EPA Photo)
by Jan 19, 2018 12:00 am

"He won't be president," Mendez de Vigo, who is also minister of education, culture and sport, told Reuters in an interview.

Asked if Puigdemont could carry out with his plans to be elected Catalonia president remotely from Brussels and rule from there while the government continued to officially rule the country's wealthiest region, based on the article 155 of the constitution, he said:

"It won't happen. The only legitimacy is that of article 155."

Meanwhile on Friday, Puigdemont said he could be re-elected as the region's president and rule remotely from his self-imposed exile in Brussels, but the Spanish government said it would not let that happen.

Supporters of Carles Puigdemont, who faces arrest for charges including sedition and rebellion if he returns to Spain, have suggested he could rule via video link -- earning him the sobriquet "the hologram president" from detractors.

"I am a member of parliament who is perfectly eligible as president," Puigdemont told Catalunya Radio. "These days many big projects are handled with the use of new technologies."

Referring to the charges against him, he added: "You can't rule from prison."

Puigdemont's administration was dismissed by the central government in Madrid after he spearheaded a drive for the northeastern region, which is already semi-autonomous, to split from Spain that culminated in a unilateral declaration of independence in October.

He regained his seat in the Catalan parliament in a Dec. 21 election that was called by Spanish Prime Minister Mariano Rajoy in the hope that pro-unity parties would win and resolve Spain's worst political crisis in decades. That ploy backfired, with parties in favour of a split gaining a slim majority.

Puigdemont moved to Brussels shortly after he was fired by Madrid but has said he would return to Catalonia if the Spanish government gave him certain unspecified guarantees -- probably a promise not to arrest him.

Other Catalan independence leaders including Oriol Junqueras, leader of the second-biggest separatist party in the regional parliament, are serving custodial sentences in Madrid for their roles in planning a banned independence referendum.

The Spanish government has been ruling Catalonia directly since it sacked Puigdemont.

Mendez de Vigo said the government would continue to directly rule Catalonia as long as necessary and that if the situation remained deadlocked as it is, there would be a new regional election in Catalonia.

"This is not what we want but that's what will happen if they act outside the law," he said.