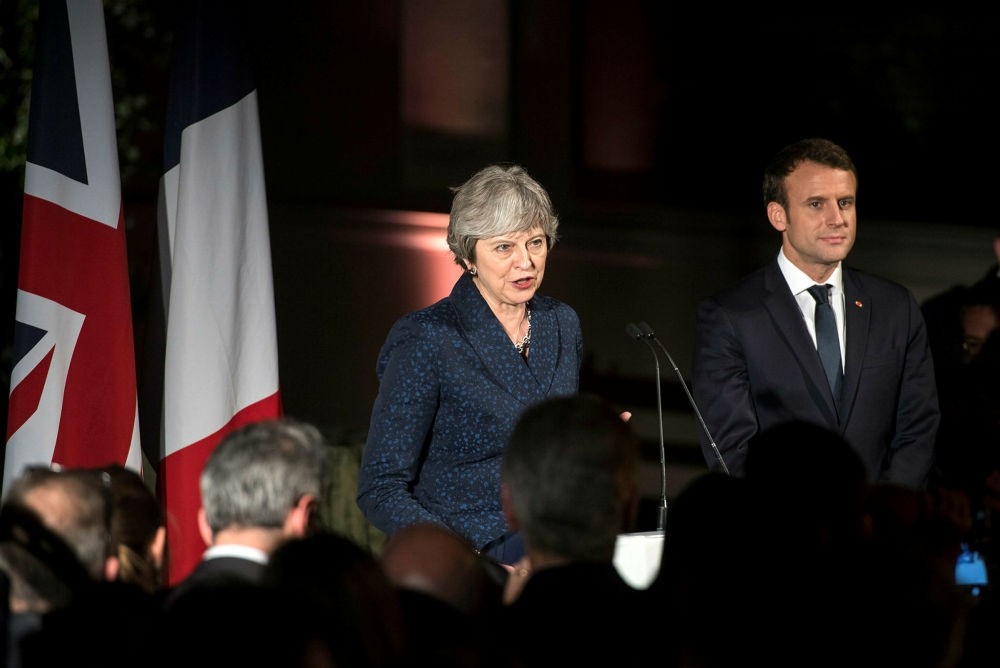 Britain and France signed a new deal to boost border security after a request by French President Macron, concerned at the number of migrants in Calais trying to reach British shores

Prime Minister Theresa May and French President Emmanuel Macron agreed a new border security deal on Thursday, through which the UK will pay more to France to stop migrants trying to reach British shores.

In a significant gesture, May offered millions to ease French annoyance over a 2003 deal that placed British border controls in the northern French port of Calais. The two leaders, meeting for wide-ranging talks at the Sandhurst military academy near London, agreed that the UK will pay an extra £44.5 million (50 million euros, $62 million) for fencing, CCTV and detection technology in Calais and other Channel ports. The town has become a magnet for migrants hoping to reach Britain, and the accord puts the burden of blocking their entry to the U.K. on France.

Alongside a new treaty aimed at better management of their joint border, Britain agreed to pay 44.5 million pounds ($62 million) for fences, security cameras and other measures in Calais and nearby English Channel ports. France also wants Britain to take in more migrants from Calais, especially unaccompanied children.

"The further investment we have agreed today will make the UK's borders even more secure," May said during a joint press conference with Macron, as reported by AFP.While the two countries cooperate closely in numerous areas, including intelligence and defense, differences over migration have often strained ties.

At the press conference, May said she was "honored" by the loan of the Bayeux Tapestry and the French president added he hoped it would open "a new chapter" for cultural and scientific co-operation.

"We are somehow making a new tapestry together," Macron said, rejecting any suggestion that it was intended to remind Britain of a victorious France.

The loan has been met with opposition by French experts who have warned about the delicate state of the 70-metre (230-foot) long embroidery.

The tapestry, which shows the English King Harold being killed by an arrow in the eye at the Battle of Hastings in 1066, is believed to have been created within years of the battle.The U.K. also said it will send three Royal Air Force Chinook helicopters and dozens of personnel to join France's military mission against Islamic militants in Africa's Sahel region. France has led efforts to fight al-Qaida and IS-linked jihadi groups in the vast region south of the Sahara desert.

In a boost to Macron, Britain is throwing its backing behind the European Intervention Initiative, a multinational European military force that the French president has proposed. He also wants a common European defense budget and security doctrine.

In return, France will send troops to join a U.K.-led NATO battle group in Estonia in 2019, aimed at countering an increasingly assertive Russia.

Britain's most prominent campaigner for leaving the European Union, Boris Johnson, has suggested building a giant bridge across the English Channel to France after Brexit, The Daily Telegraph reported.

Foreign Secretary Johnson, who led the campaign to leave the EU in the 2016 referendum, told French President Emmanuel Macron that he felt it was ridiculous that the two countries were linked by just a single railway.

The leading Brexiteer then suggested building a second crossing, to which Macron said: "I agree. Let's do it," the newspaper reported.

"Our economic success depends on good infrastructure and good connections. Should the Channel Tunnel be just a first step?" Johnson said on Twitter.

Johnson did not mention the idea of a bridge explicitly in public and it was unclear if any detailed discussions had taken place about how such a large project might be built or financed.

The Daily Telegraph said that Johnson believes a privately-funded 22-mile Channel Bridge may now be an option and would provide the capacity for increased tourism and trade after Brexit.

"Technology is moving on all the time and there are much longer bridges elsewhere," Johnson told his aides, according to the newspaper. A spokesman for the Foreign Office declined to comment. LONDON / REUTERS