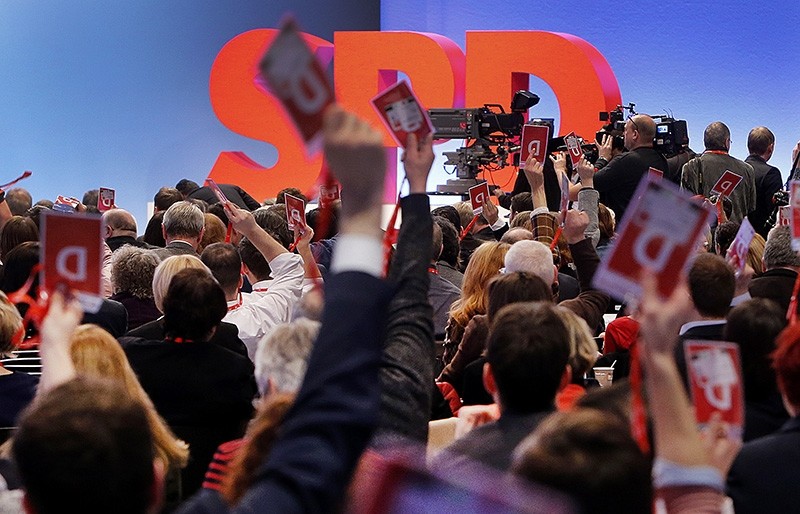 Delegates raise their cards for a poll during a party meeting of the Social Democrats, SPD, who are discussing the possible coalition talks with Chancellor Angela Merkel's conservatives in Bonn, Germany, Sunday, Jan. 21, 2018. (AP Photo)
by Jan 21, 2018 12:00 am

At an extraordinary congress in the western city of Bonn, 600 delegates from the center-left SPD and its 45-member board will have their say on entering into formal talks for a renewed alliance with Merkel's center-right CDU/CSU bloc.

The stakes could scarcely be higher for Merkel as a "no" vote would leave her with the option of leading an unstable minority government -- a prospect she has baulked at -- or face snap polls.

The fate of SPD chief Martin Schulz also hangs in the balance, with pundits predicting he would have to step down should he fail to secure the party's backing for another grand coalition.

Europe is watching closely, hoping for an end to months of political deadlock in a pivotal member state just when French President Emmanuel Macron needs Berlin's backing to push through ambitious EU reforms.

"Today is one of those days where there is much at stake for the SPD, the nation and Europe," Schulz tweeted. "May the better arguments prevail."

Schulz is due to address the party conference at 1030 GMT.

The vote outcome is far from certain after leading SPD members savaged a coalition blueprint painstakingly thrashed out by the three parties this month, complaining it contained too many concessions on issues such as migration, taxes and health care.

With his career on the line, Schulz crisscrossed the country this week trying to sell skeptical party members on the idea of another "GroKo," as the grand coalition is known in German.

He told Der Spiegel news weekly that a defeat would "very quickly" trigger new elections in which voters would be likely to "punish" the conservatives but also the SPD.

Pitted against him is the fiery chief of the party's youth wing, Kevin Kuehnert, who has been on a "#NoGroKo" tour of Germany, arguing that the party would be better served spending the next four years in the opposition.

Germany has been stuck in political limbo since September's inconclusive general election saw mainstream parties bleed support to the far-right AfD, which tapped into anger over Merkel's open-door refugee policy.

Bruised by his party's worst result in decades, Schulz initially vowed to go into opposition but then caved to pressure to reconsider after Merkel's attempt at a novel tie-up with two smaller parties collapsed in November.

The U-turn angered many grassroots SPD'ers, who believed some time on the opposition benches would help the 150-year-old party regain its fighting spirit.

Merkel, often dubbed the world's most powerful woman, has been hamstrung on the global stage as the domestic drama has played out, and she is increasingly described by commentators as entering the twilight of her rule after more than 12 years in power.

With her hopes for a fourth term now in the hands of the SPD, she has urged party delegates to make "a responsible decision" for Germany and for Europe.

"The world won't wait for us," she warned.

The 28-page preliminary coalition agreement that lays the basis for future government policies promises more spending on child care, education and pensions as well as joining France in a push to overhaul the EU.

But critics within the SPD have bemoaned the party's failure to secure a tax hike for the rich or a restructuring of the country's two-tier health care system.

They have also voiced dismay at the document's mention of limiting asylum seeker arrivals to around 200,000 a year, a flagship CSU demand.

Schulz has since insisted that many details still need to be ironed out and proposed that any future coalition government be put under review after two years.

A Forsa survey this week found that 61 percent of SPD voters were in favor of moving on to formal coalition talks.

The same poll found that the SPD would score just 18 percent if elections were held now, below the 20.5 percent garnered in September.

Schulz has pledged that any final coalition agreement will be put to a vote by more than 400,000 rank-and-file party members -- leaving Merkel's fate once again in the hands of the SPD.