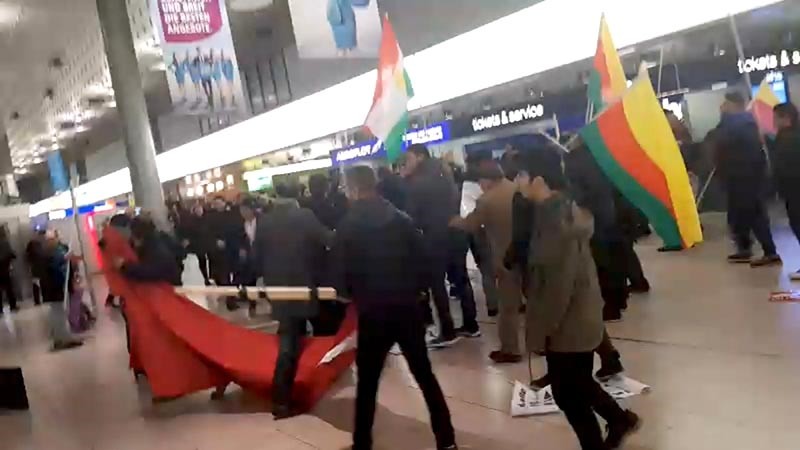 A fight breaks out during a demonstration against Turkish military operation in Syria, in the Hannover Airport, Germany, in this still image taken from a social media video Jan. 22, 2018. (Reuters Image)
by Daily Sabah with AA Jan 23, 2018 12:00 am

Sympathizers of the PKK terror organization and its Syrian affiliates the Democratic Union Party (PYD) and its armed-wing, the People's Protection Units (YPG), attacked Turkish citizens at Germany's Hannover airport Monday after a verbal confrontation over Turkey's military operation in northwest Syria.

Police said up to 180 protestors and passengers clashed after sympathizers of the PKK attempted to hold an unauthorized demonstration at the airport.


Hannover police said officers had to use pepper spray to prevent further clashes and later opened a criminal investigation against a number of suspects.

At least two people were injured during the brawl.

Supporters of the PKK have organized demonstrations in various German cities to protest Turkey's ongoing military operation against the terrorist group's targets in northwest Syria.

On Sunday night, sympathizers of PYD and YPG attacked two mosques in northwestern Germany, hurling stones and bottles of paint, breaking windows and spray-painting the names of the terrorist groups on the exterior walls.

Germany has a 3-million-strong Turkish community, many of whom are second- and third-generation German-born citizens of Turkish descent whose grandparents moved to the country during the 1960s.