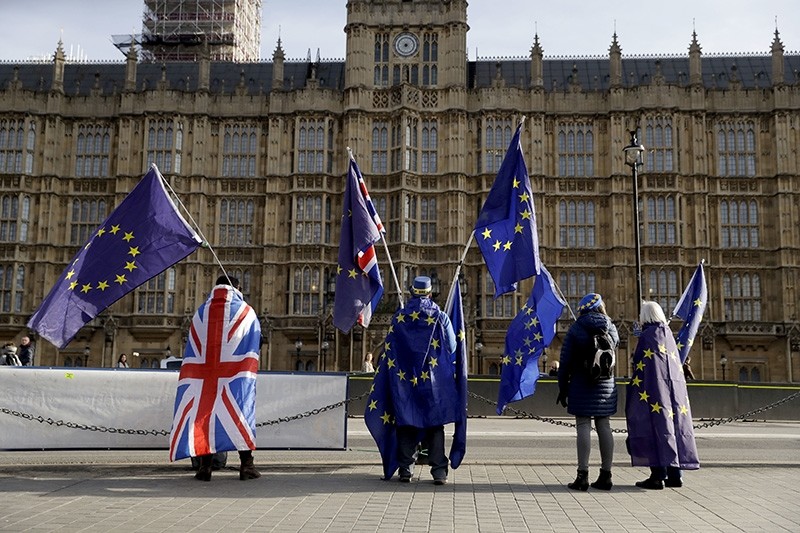 Pro-EU membership supporters hold European Union flags as they protest against Brexit across the street from the Houses of Parliament in London, Tuesday, Jan. 30, 2018. (AP Photo)
by Feb 01, 2018 12:00 am

Bulgaria, which holds the presidency of the EU, warned British Prime Minister Theresa May against plans to deny residency rights to Europeans arriving during the post-Brexit transition period.

Lilyana Pavlova, the Bulgarian minister for the EU Presidency, told AFP that she was "worried" by May's stance and that the other 27 countries would be "tough" in negotiations on Britain's exit in March 2019.

Pavlova -- a close ally of Bulgarian Prime Minister Boyko Borisov -- said in an interview that she hoped "in the end the support for the citizens will be ranked higher than political ratings."

"European acquis (laws) should be applied in the transition period, it should be followed completely," Pavlova said. "This is not the right way forward if we are not following and we are not completing the EU acquis as it is."

The EU said on Monday that Britain must follow all of the bloc's laws -- including the right of citizens to live and work where they choose -- in return for access to the European single market during the proposed transition ending in December 2020.

But May set up a fresh clash after saying that Europeans arriving in Britain during the 21-month transition phase should not get the same rights as those who arrive before Brexit day.

Bulgaria, which heads the EU for six months until June, wanted to protect both Bulgarians living in Britain and Britons living in Bulgaria, "so we are a little bit worried," Pavlova said.

The EU wants to finish talks on the transition by the end of March so negotiations on future ties with Britain can start, but has warned that deadline could be pushed back if there is no progress from London.

The Bulgarian minister said Brexit talks were now entering "the most challenging" period and that the EU needed to keep unity.

"Success for us means keeping the unity of the 27, defending the rights, because now Theresa May was very well supported by, for example the United States president in having a tough Brexit," she said.

"We prefer Britain to stay. But if they decide to leave then we will be tough in negotiations," Pavlova added.

She said they should have "roadmaps" for joining the EU, financial commitments to better road, rail and communications links, and that she hoped Serbia and Montenegro would be able to join by 2025.

But Pavlova said they would not give them "false promises" and urged the Balkan states to meet the EU's requirements for membership.

These included resolving all regional disputes before they join, adding "If they want to join the EU, they should not bring new problems to the EU."