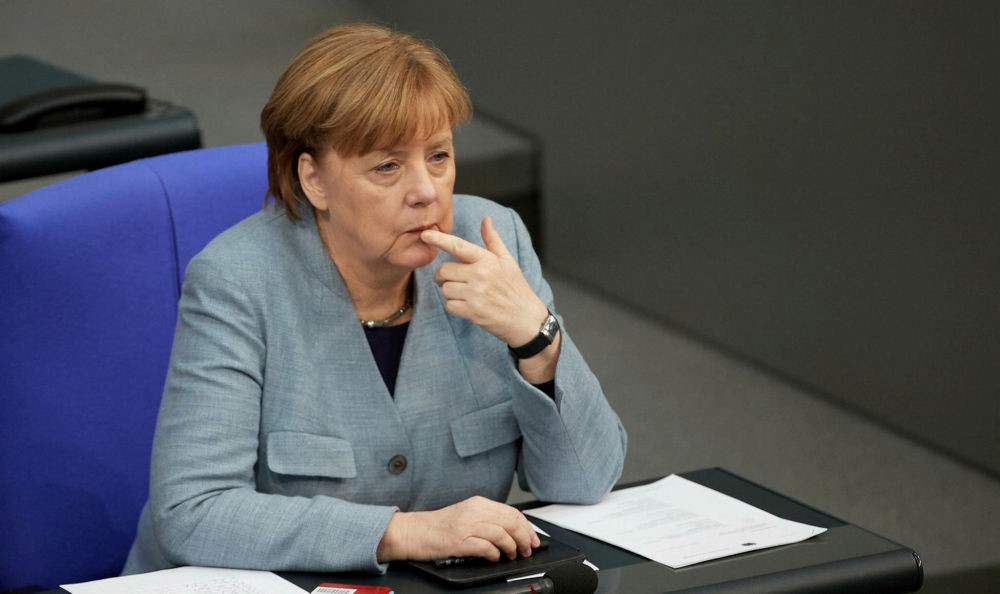 German Chancellor Angela Merkel during a session in the Bundestag, Berlin, Feb. 1
by Compiled from Wire Services Feb 03, 2018 12:00 am

The new monthly surveys released by broadcasters ARD and ZDF are showing very weak support for Angela Merkel as well as Martin Schulz, who are struggling to form a new coalition government and avoid new elections, which would only see them lose more power.

Top negotiators from Merkel's Christian Democrats (CDU), their Bavarian sister party, the Christian Social Union (CSU), and the Social Democrats (SPD) started meeting in working groups on Friday to prepare a final round of coalition talks.

The three parties hope to reach agreement by Sunday on a deal on another grand coalition with Chancellor Merkel at the helm.

However time, as well as the patience of German voters, is running out.

The Social Democrats, who have at times been a reluctant participant in the Merkel coalition talks, have slipped further in the polls.

The party slumped to 18 percent in the DeutschlandTrend survey released late Thursday by broadcaster ARD, its worst polling result yet.

A survey released by broadcaster ZDF on Friday placed the party at 19 percent, marking a one-percentage-point fall on the previous week.

The SPD is divided over the prospect of a renewed grand coalition with Merkel's Christian Democrats and the Bavarian CSU.

The CDU-CSU stood at 31 per cent in the ZDF Politbarometer survey, down two percentage points.

SPD leader Martin Schulz, who had initially vowed to go into opposition after leading his party to its worst election result since 1949, lost 5 percentage points in the DeutschlandTrend poll, with his popularity rating dropping to 25 per cent.

The sobering polling numbers came as the CDU, the CSU and the SPD made further agreements on policy, including a 6-billion-euro education packet lauded as a win for the center-left.

However the SPD has made concessions in other areas, most notably on the hot topic of family reunions for refugees, with an annual cap of 12,000 being placed on the number of people allowed to bring relatives to join them in Germany. The party had previously campaigned for the right to be extended to all refugees.

CSU Secretary General Andreas Scheuer admitted there were still obstacles to overcome, but also spoke of a willingness of the parties to reach agreement.

"We want to unleash a new dynamic in Germany," Scheuer said, but he added that the issues were complex, and urged the general public to be patient. Scheuer said the high-level talks might well continue Monday or Tuesday as differences remain over health care and employment issues.

Merkel has struggled to break the political deadlock in Europe's biggest economy since an inconclusive national election on Sept. 24 (132 days). The SPD, the CDU and the CSU all suffered heavy losses in the poll, while the Eurosceptic, anti-mass immigration AfD managed to enter the Bundestag for the first time in its short history, securing 94 seats.

The stakes are high for Merkel, whose first attempt to build a coalition with the leftist Greens and the business-libertarian Free Democrats failed last year.

The SPD's roughly 450,000 rank-and-file members will vote on any coalition agreement reached by their party leaders. A grassroots campaign has been under way in the party to prevent it from teaming up with the chancellor for another four years.

A failure to renew the current grand coalition in Germany could trigger early elections or force the chancellor to head a risky minority government.

A new election is also almost certain to hand more power to the AfD, which has been shunned by every party in the Bundestag.