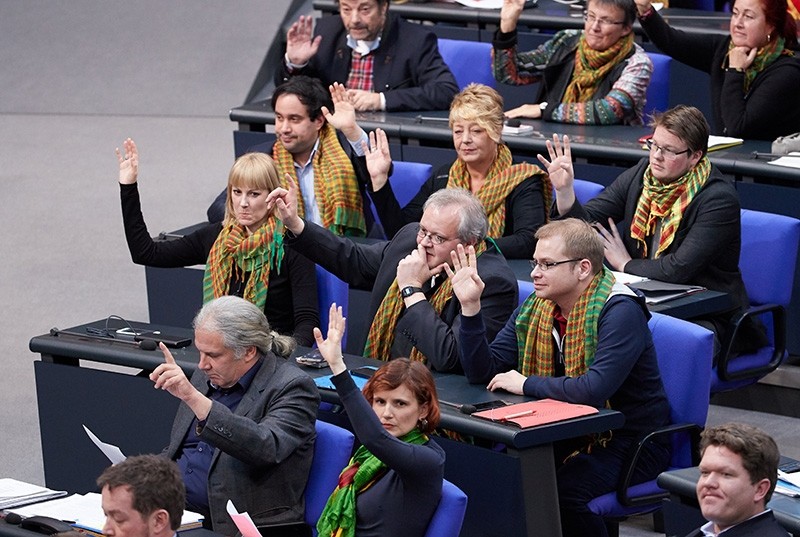 Members of the Left (Die Linke) party wear scarfs as a political gesture during a session of the German parliament 'Bundestag' in Berlin, Germany, 01 February 2018. (EPA Photo)
by Daily Sabah Feb 03, 2018 12:00 am

A deputy of the far-right Alternative for Germany (AfD) slammed his colleagues from the German Left Party (Die Linke) over their intention to question Turkey's decision to launch an operation in Syria against the PKK terror group's affiliates Democratic Unity Party (PYD) and its armed wing People's Protection Units (YPG).

Petr Bystron, who was holding his first speech at the German parliament, said that the Left Party was pretending to be "a party of peace," but was actually quite the opposite.

"Who is Erdoğan's army fighting in Syria? The Kurdish YPG, an offshoot of the banned Marxist PKK, which is considered a terrorist organization in Germany, but also in the U.S."

Referring to the Left Party members, Bystron said that they were "not concerned with stopping the armed conflict."

"Your concern is that the Turkish attack is targeting your Marxist comrades from the PKK," he said.

The far-right AfD deputy also criticized the Left Party for wearing YPG scarfs in the parliament as a show of support for the terrorist organization.

The PKK is listed as a terror organization not just by Turkey, but also by the European Union and the United States. However, it has long enjoyed relative freedom in European cities and has a particularly strong presence in Germany with PKK supporters being allowed to hold rallies, recruit militants and collect funds.

The operation is being carried out under the framework of Turkey's rights under international law, U.N. Security Council resolutions, its right to self-defense under the U.N. charter and respect for Syria's territorial integrity.