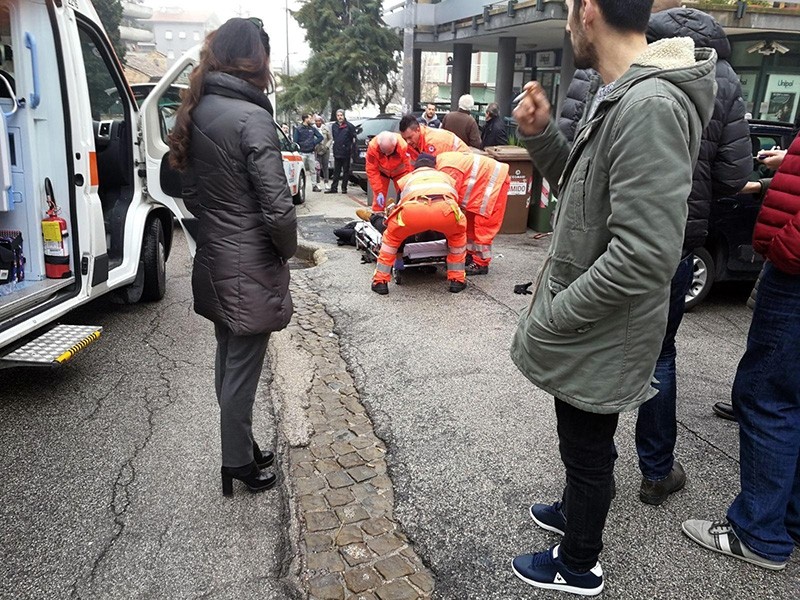 A lone gunman targeted foreigners in a drive-by shooting spree Saturday in a central Italian town, wounding six people, one of them with life-threatening injuries, before being arrested.

Police said all those wounded were foreigners and they later confirmed the arrest of a suspect identified as a 28-year-old Italian with no previous record. A video posted by the newspaper il Resto di Carlino showed a man with an Italian flag draped over his shoulders being arrested by armed Carabinieri officers in the city center, a short distance from where he apparently fled his car on foot.

Reports named the suspect as Luca Traini, a member of the far-right Northern League party, who had run in local elections last year.

The news agency ANSA reported that Traini had run as a candidate for the anti-migrant Northern League in a local election last year in the city of Corridonia. He did not win.

Both ANSA news agency and newspaper La Repubblica said the suspect was arrested when he performed a fascist salute in front of a monument to fallen soldiers. He was allegedly found to be carrying a gun when he was arrested.

Six people including "people of color" have allegedly been injured, four of them seriously, media reported.

Police said in a tweet that "the wounded persons are of foreign nationality".

Mayor Romano Carancini told Sky TG24 that the victims of the two-hour shooting spree were five men and one woman.

The attack comes a day after a Nigerian asylum-seeker was arrested in Macerata over the gruesome killing of an 18-year-old Italian woman, identified as Pamela Mastropietro. The teen's dismembered remains were found Wednesday in two suitcases, two days after she walked away from a drug rehab community.

ANSA reported that the car was seen in the area where the woman's body was found and also near where the suspect lived.

However, no official link has been made between the two incidents.

Carancini confirmed that all of the victims in Saturday's shootings were black, and acknowledged that "the closeness of these two events makes you imagine that there is a connection."

Macerata Mayor Romano Carancini said that six foreigners were wounded in the two-hour shooting spree, one of them with life-threatening injuries.

Police had warned people to stay inside while the shootings were ongoing in the town of 42,000 inhabitants. Authorities ordered public transport halted and that students be kept inside schools, which are open on Saturdays.

In addition to the murder, a heated electoral campaign is ongoing Italy where anti-foreigner sentiment has become a key theme. The head of the anti-migrant Northern League, Matteo Salvini, has capitalized on the killing in campaign appearances, and is pledging to deport 150,000 migrants in his first year in office if his party wins control of parliament and he is named premier.

Italians vote in the general election on March 4.