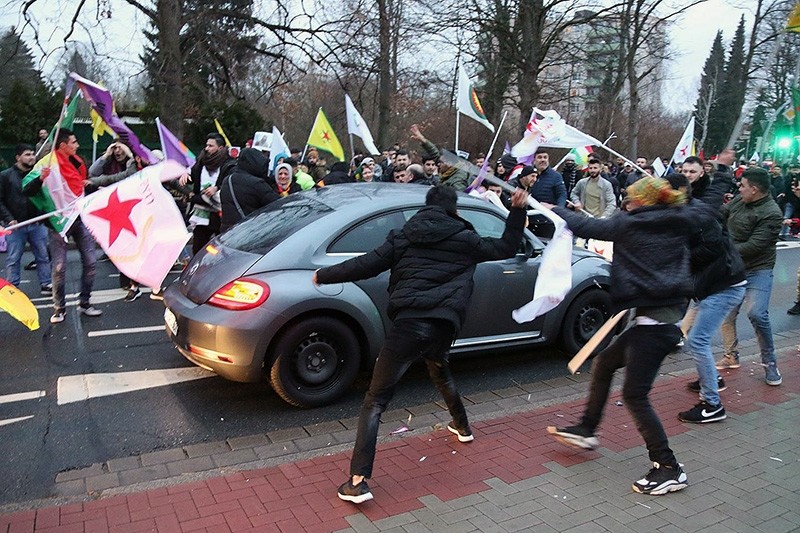 The car of a Turkish citizen was violently attacked Friday with sticks by PYD/PKK terrorist supporters in Germany, according to a witness.

Ibrahim Yıldız vehicle was attacked as he and his children were inside while in the Lebenstedt district of Salzgitter province, according to Bülent Demir, 42, who has been a shopkeeper for 20 years.

"While around 600 PYD/PKK members were demonstrating in the city center, they saw Ibrahim Yıldız passing by in his car and they attacked the car," Demir told Anadolu Agency.

"There were children in the car. They were very afraid," he added. He also said Yıldız's brother, Mustafa, also witnessed the incident and recorded it.

"In the footage, supporters of the terrorist organization are carrying banners, rags and attacked Ibrahim's car with sticks brutally, while cursing," he said, noting there was a lot of damage to the vehicle. Police have launched an investigation into the incident.

Germany has experienced a growing number of radical protests and violence by PYD/PKK supporters since the group launched a campaign two weeks ago to protest Turkey's Operation Olive Branch-launched Jan. 20 to clear PYD/PKK and Daesh terrorists from Afrin in northwestern Syria.

The Turkish General Staff said the military operation is to establish security and stability along Turkey's borders and the region as well as protect Syrians from terrorist oppression and cruelty.

The PKK has been banned in Germany since 1993, but remains active with nearly 14,000 followers among tat country's Kurdish immigrant population.

Turkey has long criticized NATO partner, Germany, for not taking serious measures against the PKK that uses the country as a platform for its fund-raising, recruitment and propaganda activities.