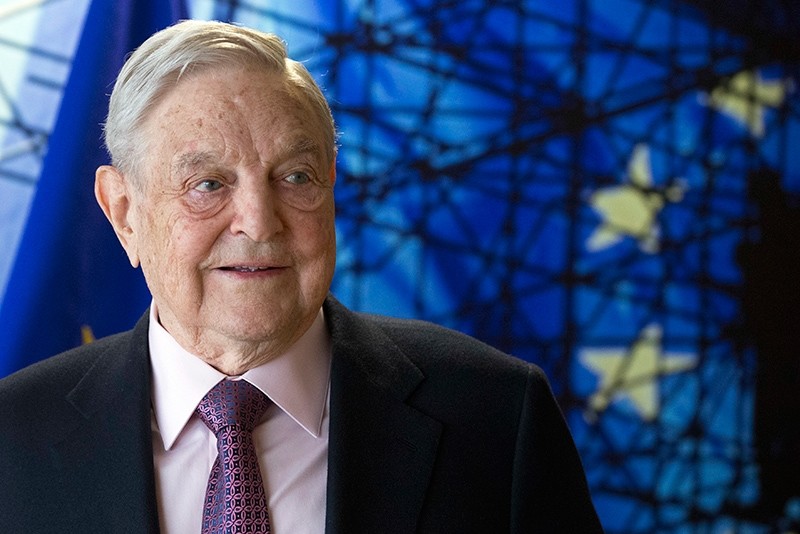 This April 27, 2017 file photo shows George Soros, Founder and Chairman of the Open Society Foundation, before the start of a meeting at EU headquarters in Brussels. (AP Photo)
by Compiled from Wire Services Feb 08, 2018 12:00 am

Prime Minister Theresa May's government will not hold a second referendum on the United Kingdom's membership in the European Union, her spokesman said Thursday after the billionaire George Soros donated money to stop Brexit.

"There are many political and campaign groups in this country, that's entirely right and as you would expect in a democracy," the spokesman told reporters.

"The prime minister's position on this matter is clear, the country voted to leave the European Union, that's what we are going to deliver and there won't be a second referendum."

Billionaire investor George Soros has donated 400,000 pounds ($555,000) to a campaign for influencing British lawmakers to vote against a final Brexit deal, its director said Thursday amid accusations of a "plot to thwart Brexit."

"Through his foundations [Soros] has contributed 400,000 pounds," said former minister Mark Malloch-Brown, chairman of Best for Britain, which advocates for the country to remain in the EU.

The Daily Telegraph, a staunchly pro-Brexit newspaper, said Soros's "campaign to overturn Brexit" was planning nationwide adverts this month "which they hope will lead to a second referendum to keep Britain in the EU."

But Malloch-Brown defended the campaign, saying it was "perfectly reasonable" that Members of Parliament should have a chance to think again about going ahead with Brexit.

"There are a lot of people out there who are frustrated," he told BBC radio, adding: "A majority of MPs are still personally Remainers and yet are about to vote for anything between a hard and a soft Brexit."

Soros, 87, a U.S. financier and philanthropist, is a favorite bete noire of nationalists around the globe from the Kremlin to his native Hungary.

He is a hate figure in the U.K. for making a billion dollars betting against pound sterling on Black Wednesday in 1992 when Britain was forced to withdraw the pound from the European Exchange Rate Mechanism.

In a speech at the World Economic Forum in Davos last month, Soros predicted that British Prime Minister Theresa May's spell in power would not last long and said British people were "in denial" about the financial consequences of leaving the EU.

"The current economic situation is not as bad as it was predicted, they live in hope, but as the currency depreciates, and inflation will be the driving force, that will lead to declining living standards.

"It's going to take some time but when it does happen, they will realize that they are earning less than before, because wages won't rise as fast as the cost of living," he said.