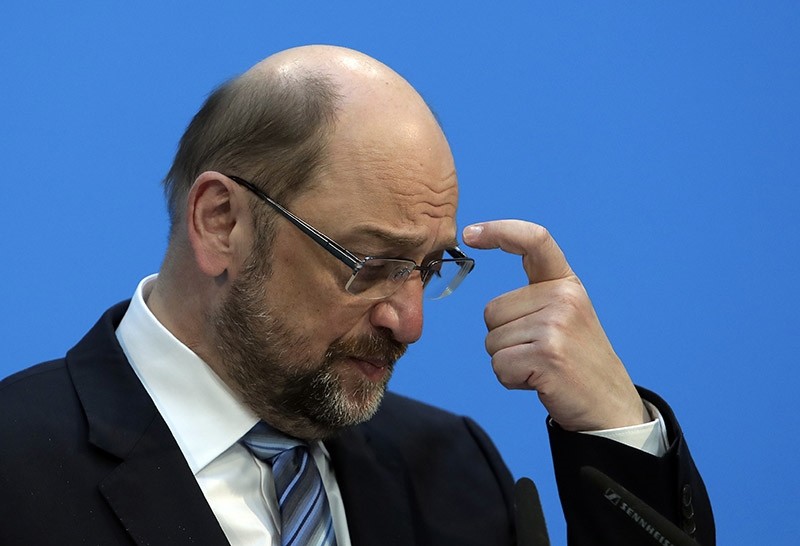 In this Wednesday, Feb. 7, 2018 photo Martin Schulz, chairman of the Social Democratic Party, SPD, scratches his head during a press statement in Berlin. (AP Photo)
by French Press Agency - AFP Feb 09, 2018 12:00 am

Germany's embattled center-left leader Martin Schulz said Friday he would abandon a bid to become foreign minister in a new coalition government with Chancellor Angela Merkel, after massive resistance from his own party.

"I hereby renounce joining the federal government and at the same time implore that this should be an end to debates about personalities" within the Social Democratic Party (SPD), Schulz said in a statement.

"My own personal ambitions must be placed behind the interests of the party."

The SPD and Merkel's conservative CDU/CSU bloc announced a hard-fought coalition deal Wednesday that included big concessions to the center-left, among them six ministries including finance and foreign affairs.

Schulz's claim on the foreign ministry marked his second major U-turn since September elections that ground the storied labor party down to just 20.5 percent of the vote.

The former European Parliament chief had previously ruled out both repeating the left-right "grand coalition" for a third time under Merkel, and serving as a minister in her cabinet.

With the coalition deal subject to a yes-or-no referendum by all 460,000 of the SPD rank and file, the sound of activists' teeth grinding at Schulz's apparent move to secure himself a cosy job had by Friday become impossible to ignore.

At the top of the party, incumbent foreign minister Sigmar Gabriel -- among Germany's most popular politicians -- lamented in a newspaper interview "how little respect there is in the SPD in our dealings with one another, and how little someone's word counts for."