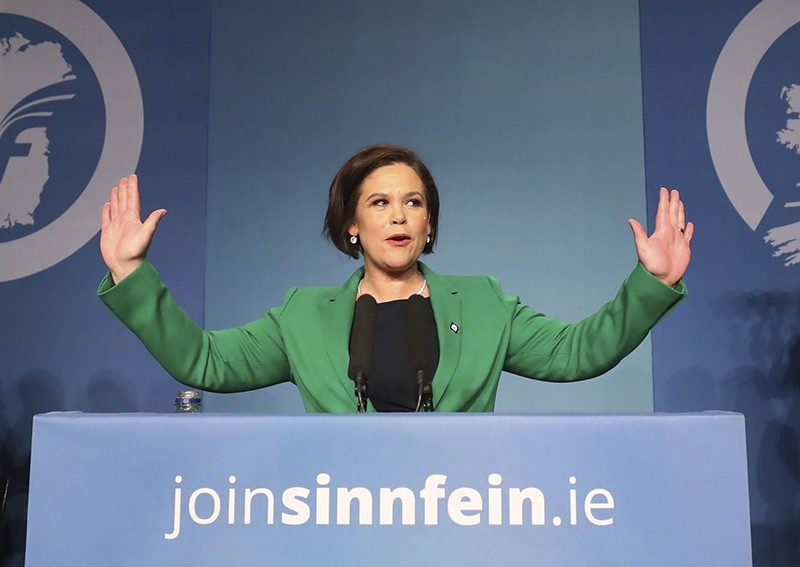 Mary Lou McDonald acknowledges the applause of delegates after she was elected as Sinn Fein's president at the party's special conference at the RDS in Dublin, Ireland, Saturday Feb. 10, 2017 (AP Photo)
by Associated Press Feb 10, 2018 12:00 am

Mary Lou McDonald took over as leader of the Sinn Fein party Saturday, ending Gerry Adams' three decades at the helm with a sweeping speech that touched on everything from abortion to Brexit and promised a united Ireland "in our time."

McDonald, 48, is the first woman to lead the party and the first Sinn Fein leader with no direct connection to Ireland's period of violence known as the Troubles. Her confirmation as the leader came at a conference Saturday attended by some 2,000 delegates in Dublin.

"We must only agree that the past is never again repeated," she said. "On other things, we can agree to disagree. The poet Maya Angelou put it well: 'History, despite its wrenching pain, cannot be unlived. But if faced with courage, need not be lived again.'"

She takes over for Adams, a divisive politician who was the face of the Irish republican movement as it shifted from violence to peace. The end of Adams' tenure marks a new era for the party, which wants to unite the United Kingdom's Northern Ireland with the Republic of Ireland to the south.

Adams, who announced in November he was stepping down after almost 35 years, was the key figure in the peace process that saw the signing of the 1998 Good Friday Agreement and the formation of a power-sharing government between Northern Ireland's pro-British and republican factions.

But many believe Sinn Fein's popularity among voters has been hindered by the presence of leaders linked to the Troubles, which killed over 3,600 people.

McDonald immediately put her own stamp on the future, trying to infuse new energy into the movement that has lawmakers on both sides of the Irish border. But she also focused on Sinn Fein's founding principle: a united Ireland.

"We are the generation of republicans who will see the rising of the moon," she said. "Sinn Fein in government, both North and South. Irish unity in our time."

McDonald also laid out her positions on the key issues of the day.

On Britain's upcoming departure from the European Union or Brexit, she said Sinn Fein will not accept any deal that reinstates border controls between Northern Ireland and the Republic. Brexit represents a threat to the prosperity of Ireland as a whole, she said.

"Ireland will not be the collateral damage in the political games and antics of Tories in London," she said, referring to the Conservative Party of British Prime Minister Theresa May.

McDonald also said the party would campaign for women's right to an abortion in Ireland's upcoming referendum on the issue and said she is committed to reaching an agreement that will restore Northern Ireland's power-sharing government on the basis of "respect and integrity for all."

Northern Ireland's last government collapsed more than a year ago amid a corruption scandal.