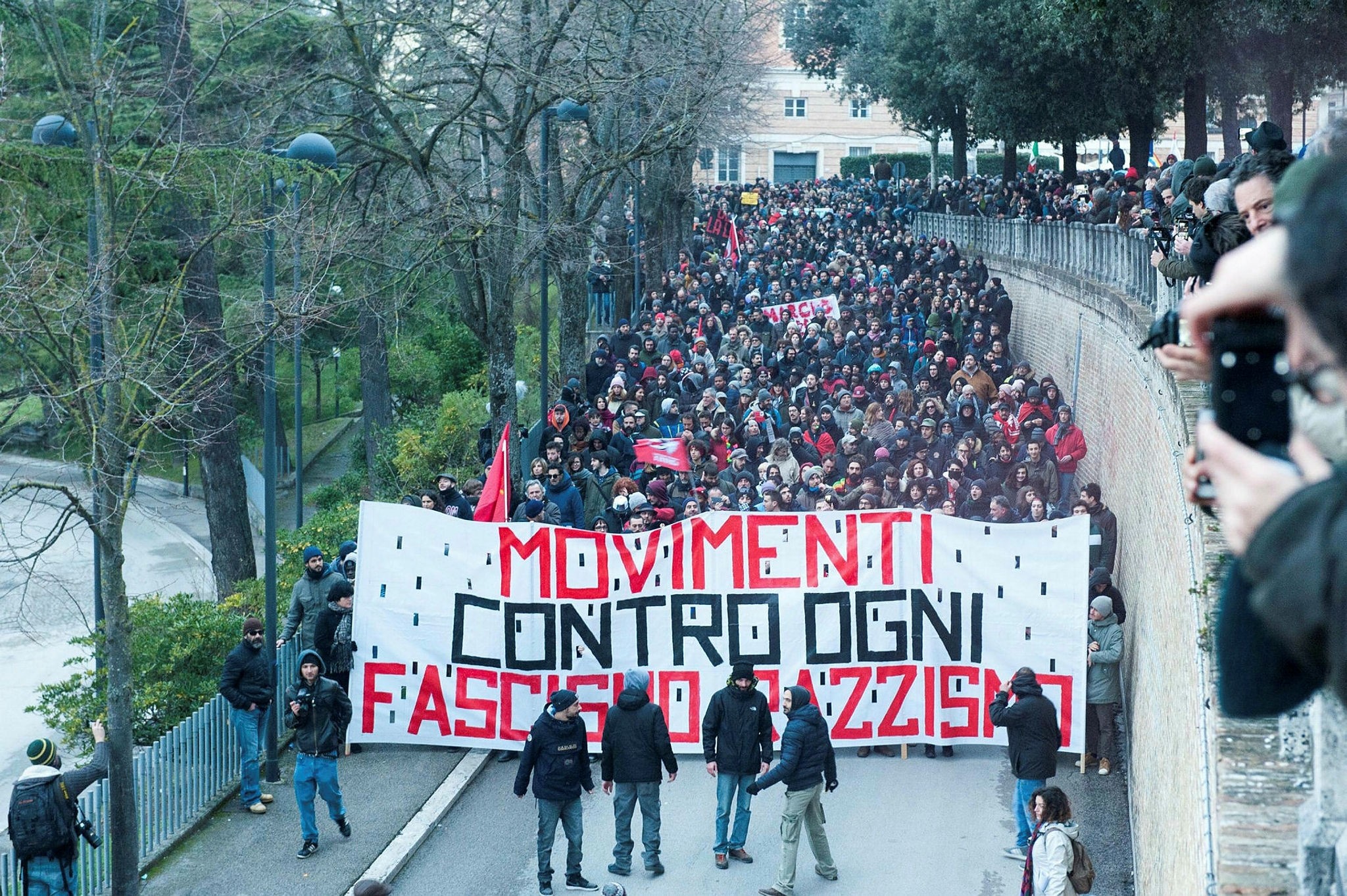 Ahead of the general elections, thousands of Italians rallied against the growing anti-immigrant, anti-EU sentiments in the country after a recent shooting spree against african immigrants

Much like in the rest of Europe, immigration and the European Union have become hot-button issues for most Italians who will be heading to the polls on March 4.

Tensions exploded on Feb. 23 when a man opened fire in public in the town of Macarata and seemed to only target African immigrants, wounding six but killing none.

The 28-year-old suspect, Luca Traini, had no prior criminal record but apparently was a candidate for the anti-mass immigration Northern League in the local election for the city of Corridonia last year, a race that he lost.

Traini told police that he was out to avenge the death of 18-year-old Pamela Mastropietro, who was found brutally murdered and dismembered. A Nigerian drug dealer is suspected of the murder by authorities.

Protesters in Macarata denounced what they perceive to be the rising far right in Italy, shouting anti-racist and anti-fascist slogans.

Some of them also claimed that unemployment has nothing to do with mass immigration and that the government is purely at fault for that.

"If there's unemployment, blame the government, not the migrants," protesters shouted. "The political parties are using populism to create hate, terror and division," said Valentina Guiliodora, one of the protestors in Macarata.

Immigration is an issue affecting the entire continent both criminally and politically.

Many European nations have seen a somewhat substantial rise in anti-immigration sentiment, a feeling that been rising ever since German Chancellor Angela Merkel decided to de facto open Europe's borders to not only Syrian civil war evacuees and refugees, but also many people from Central Asia and sub-Saharan Africa, most of whom made their way to Europe via Turkey, Greece or Italy.

The role the European Union has so far played in this crisis hasn't been minor. The United Kingdom's decision to leave the EU, for example, was largely driven by public opinion of not only non-EU but also intra-EU immigration, mainly from the eastern bloc, which has also been vehemently fighting the EU on the issue of immigration, not wanting to take any immigrants in.

More than half of Poland's citizens, for example, would rather leave the EU than take in immigrants; the same goes for other countries in the Visegrád group, including the Czech Republic, Slovakia and Hungary.

These anti-EU sentiments have spread in Italy just as they did in Greece a few years back. While concerns with the EU in Greece were largely based upon economic issues, Italians are suffering not only from economic but also migratory mismanagement on behalf of the EU, which has given rise to Eurosceptics there as well as everywhere on the continent.

However, while most other member states have Eurosceptic parties on one side of the isle and pro-EU parties on the other, most major and minor Italian parties have been very critical and other times outright hostile towards Brussels.

Three-time former Prime Minister Silvio Berlusconi of the Forza Italia, currently running in a coalition with three other center-right and right wing parties, has said that the 600,000 illegal immigrants in Italy are a "social time bomb." He has instead proposed a "Marshall Plan" for Africa that would create jo

bs and dissuade immigrants from leaving their home countries.

Deborah Bergamini of the of Forza Italia has said that opposition parties cannot be allowed to ignore the issue, pointing to official data that showed that in the first seven months of 2017, 1,534 Italians and 904 illegals were charged with rape.

"Some 40 percent of rapes are being committed by foreigners who make up 8 percent of the population. You can't sweep this under a carpet," she said.

Berlusconi's right-wing coalition, which includes the Northern League, is leading in Italian polls.

Italy also has the fourth highest public debt in the world, and the number of Italians estimated to be living in extreme poverty is just under 12 percent.

The lack of jobs is a critical factor for youth's support for Eurosceptic and anti-immigration parties and has the potential to shake the EU once more come March 4 as according to polling the majority of people under 45 would vote to leave the EU if they had the opportunity, while older generations are in favor of remaining.

The Eurosceptic Five Star Movement for example, is currently polling 27 percent, with the center-left and center-right coalition at 28 and 37 percent, respectively.