Four anti-Semitic crimes a day in Germany in 2017, report says 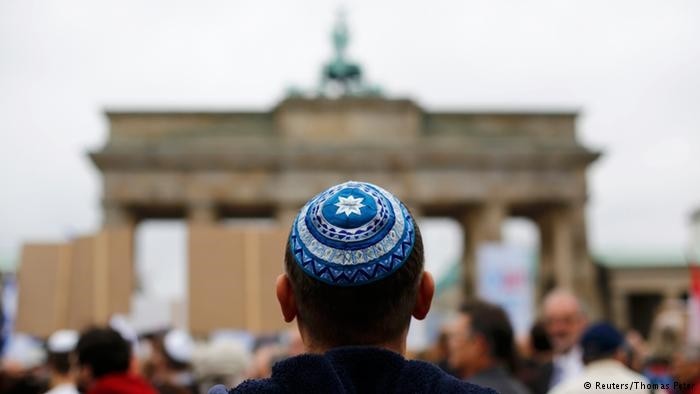 The vast majority of anti-Semitic crimes in Germany were carried out by right-wing extremists, according to a newspaper report.
by Compiled from Wire Services Feb 13, 2018 12:00 am

An average of four anti-Semitic incidents take place each day in Germany, according to new statistics, with far-right extremists behind the majority of attacks

German authorities said the number of anti-Semitic crimes in the country remains high, with the equivalent of nearly four incidents per day in 2017 and in the majority of cases far-right extremists are to blame.

Yesterday, Berlin's Tagesspiegel newspaper cited a report prepared for the Left Party in parliament showing that, based on preliminary figures, 1,453 anti-Semitic incidents were reported in 2017, compared with 1,468 in 2016 and 1,366 in 2015. Of those, 32 were acts of violence and 160 involved property damage, with 898 classified as "incitement," like hate speech.

The figures also showed that 1,377 of the incidents, or 95 percent of cases, involved far-right extremists. Despite societal concern over anti-Semitic hate crime carried out by Muslims, the vast majority of perpetrators are ethnic Germans, said former Israeli Ambassador Shimon Stein and historian Moshe Zimmerman in an editorial published Thursday in the FAZ newspaper, as reported by dpa.

In a country that has long struggled to deal with its collective guilt over the Nazi era and the Holocaust, the taboo-breaking new extremists have reawakened deep fears about rising xenophobia and race hate.

Apart from Jewish groups, far-right extremist reportedly stepped up their attacks against refugees in the country. More than 200 attacks on refugee shelters by far-right groups were reported across Germany in 2017.

Far-right offenses in Germany have spiked to their highest level since 2001, amid growing anti-refugee and migrant sentiment in the country triggered by propaganda from far-right parties.

A series of incidents have unsettled German authorities and the Jewish community. In Berlin in November, 16 Stolpersteine (stumbling blocks), small brass memorial plaques outside the homes of Holocaust victims, were dug out of the ground and stolen.

While the perpetrators were never identified, the violation was unnerving, coming just days before commemorations of the Night of Broken Glass (Kristallnacht) pogroms on Nov. 9, 1938.

"It was the first time that so many Stolpersteines were taken in just a few days," said Silvija Kavcic, the Berlin coordinator of the initiative that has laid more than 7,000 of the plaques in the German capital, as reported by Agence France-Presse (AFP).

The head of the German chapter of the Human Rights Watch, Wenzel Michalski, said that anti-Semitism in the country is growing "ever more virulent and more violent."

The head of the Central Council of Jews in Germany, Josef Schuster, shared his concern, saying taboos that had been held for decades after the war seemed to be crumbling.

The rise of the right-wing populist Alternative for Germany (AfD) party, which came in third in Germany's general election with nearly 13 percent of the vote, has compounded tensions. Founded more than four years ago as a eurosceptic party, the AfD has since lurched to the right, adopting a staunchly anti-Islam and anti-foreigner party platform.

The AfD has enjoyed a surge of support in the wake of Chancellor Merkel's controversial decision two years ago to open the nation's borders to refugees stranded in Hungary. Key AfD members have challenged Germany's culture of atonement over World War II and the slaughter of 6 million Jews in the Holocaust.