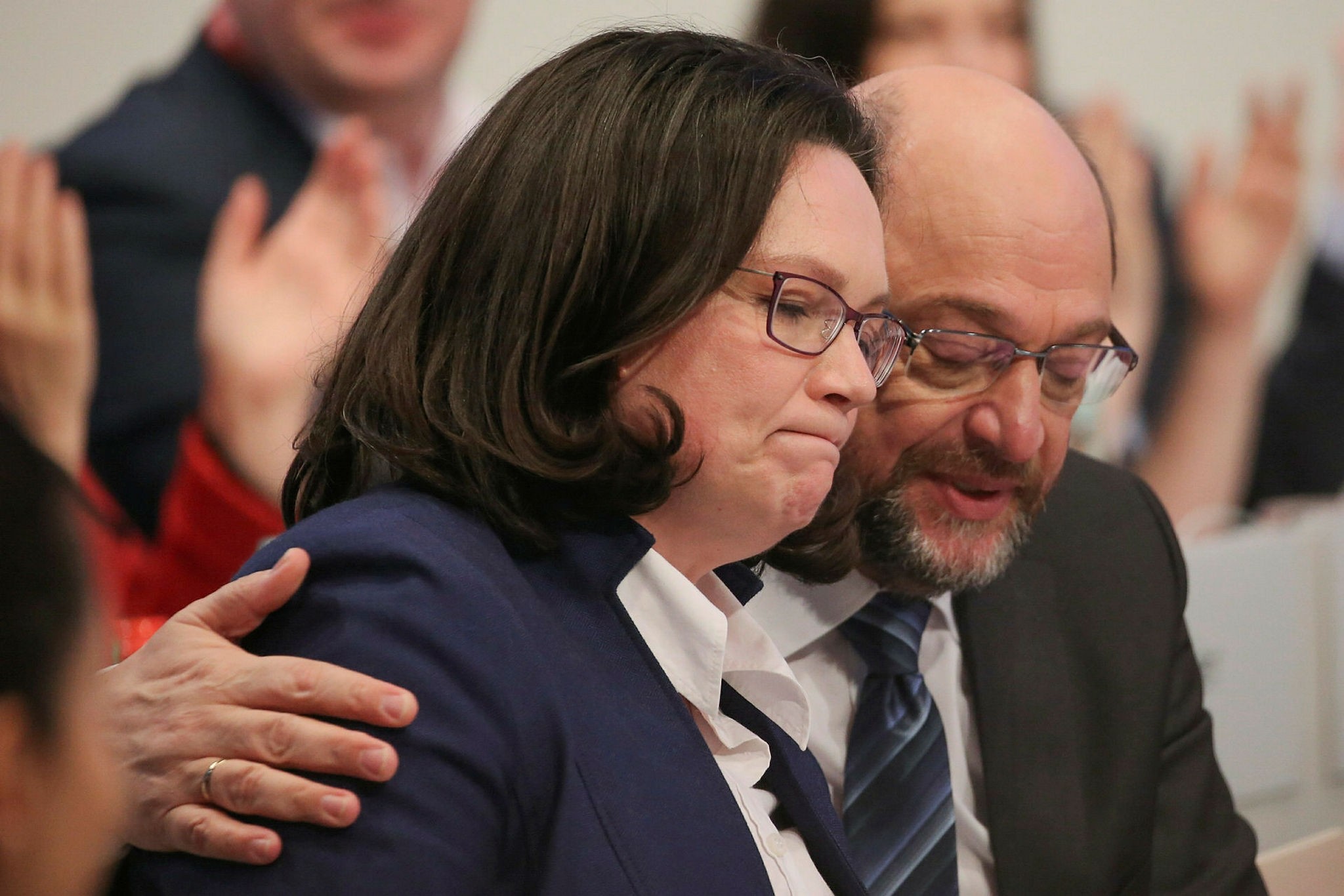 Following a controversy over Martin Schulz becoming the next German foreign minister, the Social Democratic party has been deeply divided over party leadership and face a slump in opinion polls

Amid a swift leadership transition, Germany's Social Democrats (SPD) sank further into chaos on Tuesday after the party agreed to a coalition deal with Chancellor Angela Merkel's conservatives.

Deeply divided over the coalition deal and the division of ministerial posts, and facing a slump in opinion polls, SPD leaders are trying to convince 464,000 party members to back the deal in a ballot on which Merkel's fourth term hangs.

With many SPD rank and file harboring misgivings about sharing power with Merkel again, the result of the vote, due on March 4, is wide open. If members vote "no" to the coalition deal, a new election looks the most likely option.

The most urgent matter for the SPD is to get a new leader in place after Martin Schulz said last week he would quit to allow the party to regroup.

Schulz's own plans were becoming a major distraction for the SPD. The former European Parliament president said last Wednesday that he planned to become Germany's next foreign minister – a risky move given that, after the election, he had explicitly ruled out entering Merkel's next cabinet.

He also said Andrea Nahles, the party's parliamentary leader, would take over as the SPD's chairwoman. The Berlin branch of the SPD also opposes Nahles's appointment as caretaker leader.

The planned handover of the SPD leadership from Martin Schulz to Andrea Nahles is also viewed with skepticism, according to a survey by Emnid for Sunday's edition of the Bild newspaper.

Other senior party members back Nahles and urged the party to put its house in order quickly.

"Every one of us would be well advised to put the interests of the party and country above personal ambition. End the lack of discipline in the SPD!" one of the party's deputy leaders, Ralf Stegner, told the Rhein-Neckar-Zeitung.

In a cartoon published on Tuesday, the Sueddeutsche Zeitung daily showed Nahles with a whip riding an SPD snail.

Just 33 percent of German citizens said the SPD would be more successful under Nahles, while 52 percent did not expect this to be the case.

Schulz's decision to accept the post of foreign minister has also irked the incumbent, his party colleague Sigmar Gabriel, who called the move "disrespectful" on Thursday evening.

German Foreign Minister Gabriel lashed out at Martin Schulz, saying his party colleague had broken a promise not to serve in Chancellor Angela Merkel's new cabinet. After fierce criticism from some former allies, Schulz ditched plans to take the post of foreign minister.

Meanwhile, according to a survey, around two-thirds of Germans do not consider the SPD fit for national government, less than two weeks before the party is set to vote on a new coalition deal with Chancellor Angela Merkel's conservatives, as reported by the dpa.

A survey of around 5,000 people, carried out by Civey for news portal t-online.de, showed that 67.1 percent of those questioned shared this view. Just 25.6 percent considered the SPD fit for government, although this number was considerably higher among SPD supporters, at 68.7 percent.

Among supporters of Merkel's Christian Democrats and their Bavarian sister party, the Christian Social Union (CSU) – with whom the SPD are poised to form a with coalition government – 71.6 percent were critical of the SPD's ability to govern.