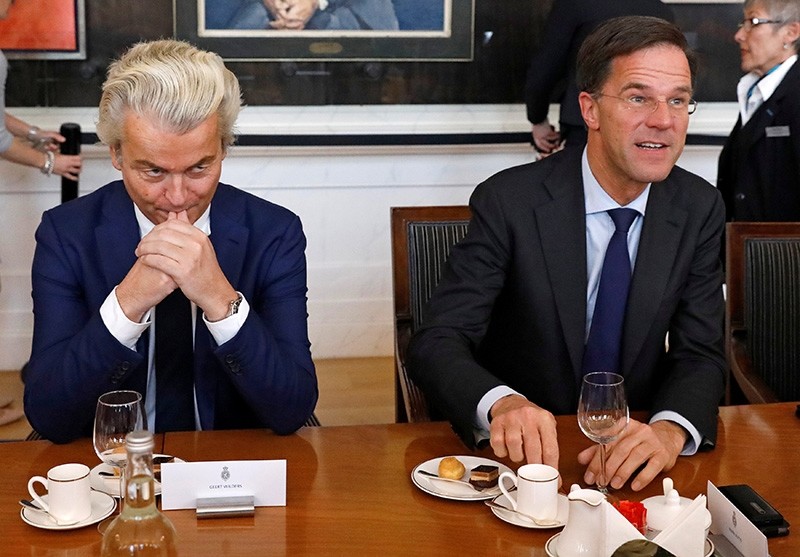 Dutch Prime Minister Mark Rutte (r) of the VVD Liberal Party and Dutch far-right politician Geert Wilders of the PVV party take part in a meeting at the Dutch parliament after the general election in the Hague, Netherlands (Reuters File Photo
by Feb 15, 2018 12:00 am

Dutch public prosecutors Thursday threw out a bid by far-right lawmaker Geert Wilders to have the prime minister charged with discrimination against the Dutch people.

Wilders, leader of the anti-Islam Freedom Party (PVV), lodged the complaint with prosecutors in November accompanied by boxes full of statements in support of his action.

"We are treated like second class citizens in our own country. That's why I am seeking action against Mark Rutte," Wilders said on a website set up for his campaign.

"Enough is enough. If there is anyone who is badly treated in the Netherlands, it is the Dutch themselves," he added.

Wilders pointed to such things as free medical care for asylum seekers to support his case.

But the OM added in a message on its Twitter account that "moreover the public prosecutor does not have the legal power to crimes committed by government members."

Only the Dutch parliament or the king could order the attorney general at the Supreme Court to investigate allegations of crimes by members of the government, the OM said.

Wilders said the decision not to charge Rutte was "incomprehensible and cowardly."

It was just the latest tussle between the two political leaders, after Rutte's Liberal VVD party won March 2017 elections to return as the largest party in parliament, with Wilders' PVV in second place.

On Tuesday, Wilders brought a motion of no-confidence against Rutte amid a scandal over the resignation of his foreign minister. But Rutte overwhelmingly survived the vote.

Wilders himself will return to court in May to appeal his own 2016 conviction, when he was found guilty of discrimination against Moroccans in a 2014 election rally speech.