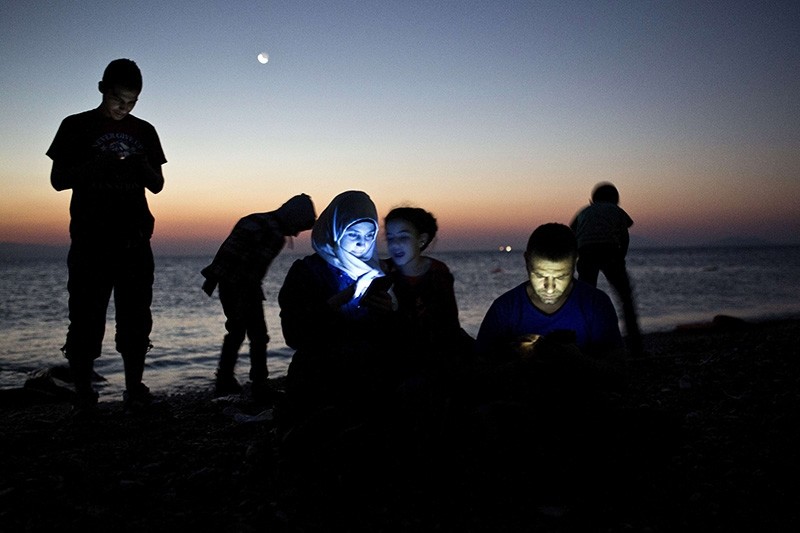 Migrants check their mobile phones after getting out of an inflatable boat on a beach on the Greek island of Kos, after crossing a part of the Aegean Sea between Turkey and Greece, on Aug. 12, 2015. (AFP Photo)
by Feb 15, 2018 12:00 am

A new smartphone app aims to help migrants in Italy find hospitals, schools and police stations at the press of a button - and quickly seek help if they face abuse or exploitation.

More than 600,000 migrants have reached Italy from North Africa in the last four years, many fleeing war and poverty.

Surveys show Italians are increasingly uneasy with the influx, and immigration has become the main battleground in campaigning for the nation's March 4 parliamentary elections.

Many migrants struggle to adapt when they arrive, said Oliviero Forti of aid group Caritas, which developed the app.

"They need a travel companion," he said, adding that migrants tend to arrive with nothing apart from a phone.

"We felt the need to provide a first lifeline," he told the Thomson Reuters Foundation by phone.

Named MigrAdvisor - in a nod to travel website TripAdvisor - the app uses geolocation to show users on a map where to find health facilities, police headquarters, embassies, consulates, kindergartens, post offices, Caritas centers and other services.

The app also provides advice and emergency numbers for unaccompanied children and migrants who can end up victims of slavery and exploitation - from forced labor to sex work.

Migrants, mainly from Africa, have been flocking to the fields of southern Italy for years to scrape a living as seasonal pickers of olives, tomatoes and oranges, often working long hours in exploitative conditions, rights groups say.

In January, a European security watchdog warned that human traffickers were capitalizing on widespread chaos at migrant reception centers across southern Europe to transport their victims undetected and lure other migrants into forced labor.

A recent report by the United Nations migration agency (IOM) estimated that 80 percent of Nigerian girls arriving in Italy by sea were at risk of being forced into prostitution.

The app is available in four languages - English, Italian, French and Arabic - and has been downloaded more than 500 times since it was launched earlier this month, Forti said.

The project, which was partially funded by the U.S., is the last in a series of initiatives using the internet to aid migrants in their journeys. The Red Cross and the IOM recently launched similar pilots in Europe and Central America.