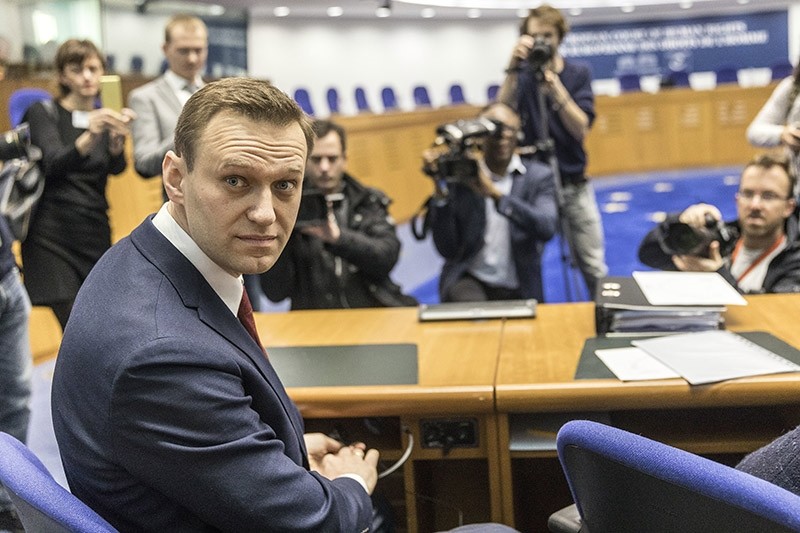 This is a Wednesday, Jan. 24, 2018. file photo of Russian opposition activist Alexei Navalny as he poses for photographers prior to a hearing at the European Court of Human Rights in Strasbourg, eastern France. (AP Photo)
by Compiled from Wire Services Feb 15, 2018 12:00 am

Russia's communications providers have blocked access to the website of opposition leader Alexei Navalny on orders of the state communications watchdog.

The agency, Roskomnadzor, demanded that Navalny remove a video alleging that Deputy Prime Minister Sergei Prikhodko received lavish hospitality from billionaire Oleg Deripaska. Navalny refused to obey a court order threatening to shut down his web resources and appealed it.

His website was blocked Thursday, though the YouTube video of his investigation has remained available. The probe draws from the social media account of a woman who claims to have had an affair with Deripaska.

Roskomnadzor confirmed in a statement on Thursday it had ordered telecoms operators to block Navalny's site because the offending material was still there. It said Instagram had complied with a similar request to take down related material and that it was waiting for Google to delete a YouTube video.

The material it wants removed relates to an investigation disclosed by Navalny, who has been barred from running in next month's election, which alleges that Deripaska met Sergei Prikhodko, Russia's deputy prime minister, on a yacht belonging to the businessman off the coast of Norway in 2016.

Navalny questioned the ethics of the meeting in which he said the two men discussed U.S.-Russian relations, and he posted what purported to be photographs of the encounter taken from the social media account of a young woman who was also on the boat.

He also issued a YouTube video to accompany his investigation that has been watched over 5 million times.

Deripaska, in a statement last week, accused Navalny and others of spreading lies about him and was reported to have obtained a court order in southern Russia to have the offending material removed.

"These allegations have nothing to do with reality, are the fruit of the imagination of a group of people, and the result of a planned campaign aiming to damage my reputation."