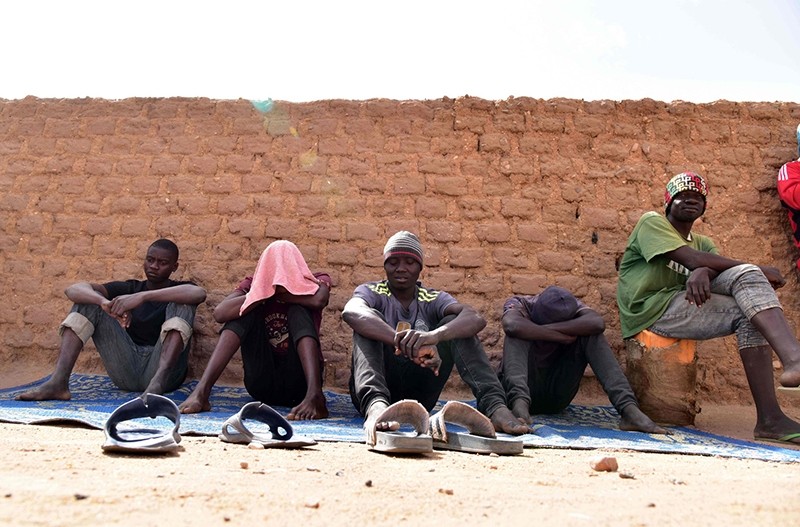 This file photo taken April 1, 2017, shows migrants from West Africa in Agadez, northern Niger, waiting to go to Libya from where they will attempt to reach Europe by crossing the Mediterranean sea. (AFP Pho
by Daily Sabah with DPA Feb 20, 2018 12:00 am

The number of people illegally crossing into the European Union fell by 60 percent in 2017, compared to the previous year, reaching its lowest level in four years, Frontex, the EU's border and coastguard agency, said in a report released on Tuesday.

While the number of illegal crossings has been gradually dropping since the height of the migration crisis in Europe in 2015, when about 1.8 million people crossed into the bloc, the 2017 figure is still well above the pre-crisis average of between 72,000 and 140,000.

The number of migrants arriving through the Central and Eastern Mediterranean and the Western Balkan routes has dropped significantly over the year.

Turkey, which has been a major route for refugees trying to cross into Europe, saw a significant drop in migration in 2017. Undocumented migrant deaths in the Aegean Sea plummeted 85 percent in 2017 compared to 2016, according to Anadolu Agency's figures.

In March 2016, Turkey and the EU signed a deal to discourage irregular migration through the Aegean Sea by taking stricter measures against human traffickers and improving the conditions of some 3 million Syrian refugees in Turkey. Since then, the number of refugees detained crossing the Aegean Sea between Turkey and Greece has considerably fallen.

At the same time, crossings through the Western Mediterranean have doubled since 2016, reaching a new high of more than 23,000 people.