Stalin: tyrant or hero? Russians lean toward hero 65 years after his death 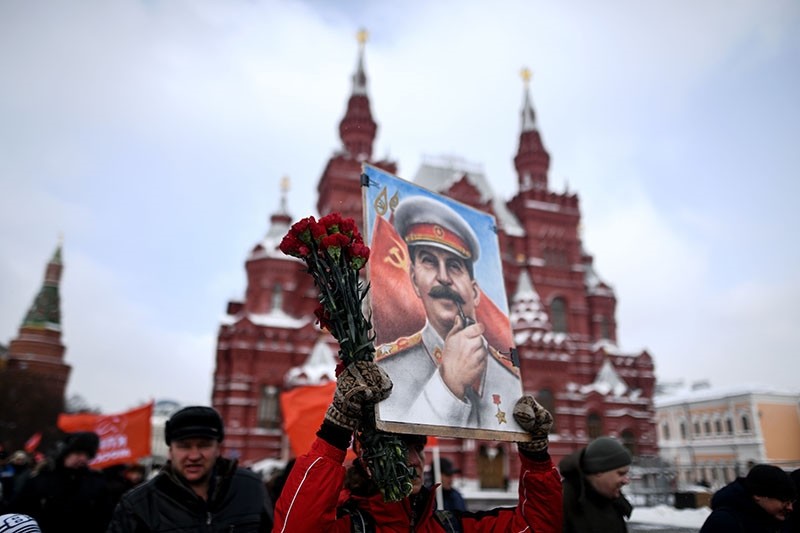 Die-hard Communists on Monday laid flowers at the tomb of Joseph Stalin in Moscow to mark the 65th anniversary of his death, as the rehabilitation of the Soviet dictator gathers pace in Russia.

Although the flower-laying ceremony takes place by the dictator's tomb near the Kremlin walls every March 5, monuments to Stalin have sprung up across Russia over the past year as top officials seek to downplay the extent of his bloody purges.

Stalin's reign saw millions executed and sent to Gulag prison camps or exile in remote regions, with many released only after his death in 1953.

His legacy still divides the nation, with many seeing him primarily as the man who led the Soviet Union to victory over Nazi Germany and drove the industrialization of Russia.

"The problem is that our countrymen simply do not understand the extent of Stalin's crimes and do not know what his purges were really about," historian Yan Rachinsky of Memorial, Russia's top human rights group, told AFP.

Memorial, which leads research into Stalin-era repression, was forced to register itself as a "foreign agent" under a controversial 2012 law, which it says hampers its ability to function.

Last summer, a plaque honoring Stalin that was removed in the 1960s as part of Soviet leader Nikita Khrushchev's process of "de-Stalinization", was restored at the Kutafin Moscow State Law University despite 20,000 people signing a petition against the plan.

And in September a bronze bust of the dictator was unveiled in the center of the capital, an initiative of the state-backed Russian Military History Society whose chairman Vladimir Medinsky is culture minister.

Other towns have made similar moves and some officials, such as Vladimir Vladimirov, the governor of the southern Stavropol region, are proud to display a bust of Stalin on their desks.

Since President Vladimir Putin took power in 2000, a growing number of Russians have taken a positive view of Stalin's role in history.

But the process of rehabilitation gained momentum in 2009, when a quote praising Stalin returned to the Moscow metro station Kurskaya after having been removed under Khrushchev.

"Stalin instilled us with loyalty to the people. He inspired us to labor and heroism," it reads.

The head of Russia's security services last year said a "significant proportion" of those implicated in Stalin's purges were guilty of "links to foreign intelligence services" or conspiring against Soviet power.

Putin in February praised the achievements of the Stalinist writer Alexander Prokhanov, who edits an ultra-nationalist, anti-Semitic newspaper and has called for a new Cold War.

And in January the release of the British comedy "The Death of Stalin" was canceled after officials said it contained "information whose distribution is legally banned in Russia".

A cinema that showed the film in defiance of the ban was raided by police and ordered to pay a fine.

Souvenirs and merchandise bearing Stalin's face are available in bookshops, museums and airports across Russia, while he sometimes appears in a flattering light in films aired on state television.

Last year Stalin topped a poll by the independent Levada Center which asked its respondents who they considered the most outstanding figure of world history.

"(They) make a myth of the Soviet past, either with a hidden justification for its crimes or, at least, an attempt to play down their scale," he said.
Last Update: Mar 05, 2018 2:56 pm
RELATED TOPICS