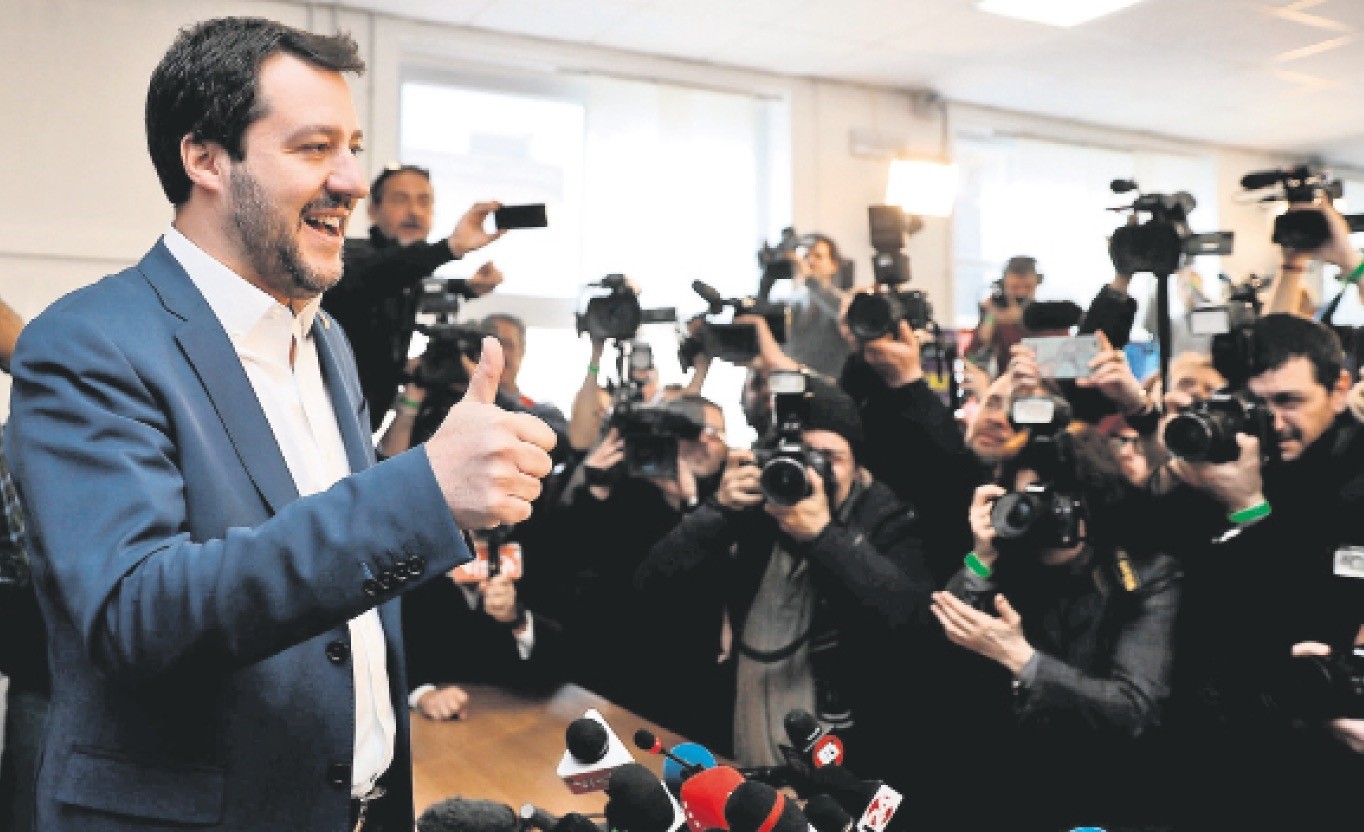 The head of the antiestablishment Northern League, Matteo Salvini, gives a thumbs-up as he arrives for a press conference, Milan, Italy, March 5.
by Compiled from Wire Services Mar 06, 2018 12:00 am

With no faction winning a clear majority and a hung Parliament expected, the results confirmed that negotiations to form a new government that can win a confidence vote would be long and fraught.

Preliminary results released by Italy's Interior Ministry showed the center-right coalition winning about 37 percent of the parliamentary vote, and the 5-Star Movement getting about 32 percent, with the center-left coalition far behind with 23 percent.

In an upset, the results showed the right-wing, anti-immigrant and euro-skeptic League party of Matteo Salvini surpassing the longtime anchor of the center-right, the Forza Italia party of ex-Premier Silvio Berlusconi. According to the partial results, the League captured around 18 percent of the vote, while Forza Italia had less than 14 percent.

Berlusconi, the billionaire media mogul who has dominated Italian politics for more than two decades, suffered a humiliating setback in Sunday's election by coming second to the far-right League party in an alliance he expected to dominate.

The alliance is set to win the most votes but fall short of an overall majority, and Berlusconi's promise to rein in populist forces rings hollow after a surge in support from voters disillusioned with traditional politics.

"The Berlusconi 'miracle' has failed," the left-wing daily La Repubblica decreed yesterday, according to AFP.

The result opens the prospect of Berlusconi playing second fiddle to League leader Matteo Salvini. Despite sex scandals, serial gaffes and legal woes, the flamboyant tycoon had made an astonishing return from political oblivion to the political frontline aged 81.

The anti-establishment 5-Star Movement saw its support soar to become Italy's largest single party by far, and one of its senior officials said yesterday that forming a coalition without it would be impossible. The League's economics chief yesterday raised the possibility of an alliance with 5-Star. Any government based on that combination would be euro-skeptic, likely to challenge EU budget restrictions and be little interested in further European integration.

The 5-Star Movement considers itself an Internet-based democracy, not a party and views established parties as a parasitic caste. Since its birth in 2009 under the auspices of comic Beppe Grillo, the 5-Stars have attracted legions of mostly young Italians who are facing few job prospects and are fed up with Italy's traditional politicians.

The 5-Stars had a remarkably strong showing in the south, which has long been a stronghold of the center-right and Forza Italia.

Between the League and the 5-Stars, the partial results showed that the two parties with the most Eurosceptic platforms together topped the 50 percent needed to rule Italy. While the two are rivals, that scenario has been seen as the key barometer to gauge Italy's future relations with Brussels and a "nightmare scenario" for the European Union and markets if they were to form an unlikely alliance.

Claudio Borghi of the League told Sky that the election results send a clear message to Brussels, and he didn't rule out a melding of positions with 5-Star.

"I think the will of the Italian people is very clear. The forces in favor of what Europe has done have been redimensioned," Borghi told Sky TG24, as reported by AP. "It's a very strong message."

It will now be up to President Sergio Mattarella, a constitutional scholar, to sound out the political parties to determine who has the best chances of forming a government. The head of state has a ceremonial position that is meant to be above the political fray.