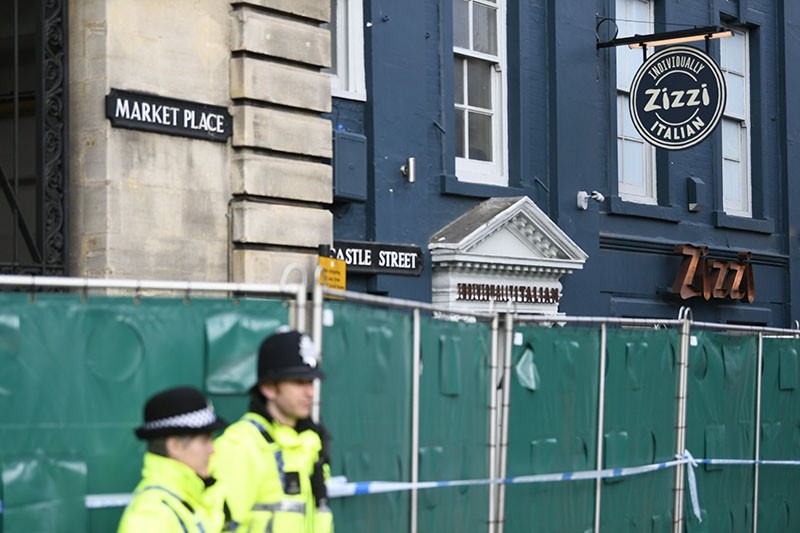 Police stand near a cordoned off Zizzi restaurant after traces of the nerve agent used against former Russian spy Sergei Skripal and his daughter, Yulia, have been found at the establishment in Salisbury, southern England, March 11, 2018. (EPA Photo)
by Compiled from Wire Services Mar 11, 2018 12:00 am

British media says traces of the nerve agent used to attack a Russian ex-spy and his daughter have been found in the town of Salisbury in southern England where the two were poisoned.

BBC and Sky News said Sunday that traces have been detected. BBC said its sources say traces were found at the Zizzi, an Italian restaurant where Sergei Skripal and his daughter Yulia reportedly ate on the afternoon of March 4 before falling critically ill.

Other patrons who ate there at the same time were not believed to be in danger, the report, which did not cite a source, added.

Cordons remain in place at a host of locations across Salisbury, including Skripal's house and the cemetery where his wife and son are buried, news agency Press Association reported.

Skripal - a former colonel in Russian intelligence who was imprisoned in Russia in 2006 on allegations of spying for Britain - was found unconscious with his daughter on a bench near a shopping center in Salisbury, almost two hours after eating at the restaurant.

Detective Sergeant Nick Bailey, who fell seriously ill after tending to the pair, released a statement from hospital on Saturday saying "he does not consider himself a hero" and was "merely doing his job."

Emergency services said in an initial statement on March 9, that they believed that the two had been exposed to an unknown substance but later said a type of "nerve agent" was used in the incident.

More than 250 officers from Britain's counter-terrorism units are currently involved in investigating the incident, Home Secretary Amber Rudd said earlier Saturday after chairing a meeting of the nation's top-level Cobra emergency committee. 180 British soldiers have also been assigned in Salisbury.

"I want to stress that they are proceeding with speed and professionalism," Rudd said. "We are putting in enormous resources to ensure that they have all the support that they need to do that."

The Skripals' case has drawn media speculation that Russian state actors could be behind the attack, prompting comparisons to other suspicious deaths of Russians on British soil - specifically Alexander Litvinenko in 2006 and Alexander Perepilichny in 2012.

Skripal, 66, and his daughter Yulia, 33, are still fighting for their lives in hospital after being exposed to the toxic substance. Police say that in total, 21 people have received medical treatment following the incident.

Skripal was granted refuge in the U.K. following a 2010 spy exchange between the U.S. and Russia. He had been convicted of "high treason in the form of espionage" by a Moscow military court in 2006 and was sentenced to 13 years in prison after admitting to leaking information to British intelligence services.