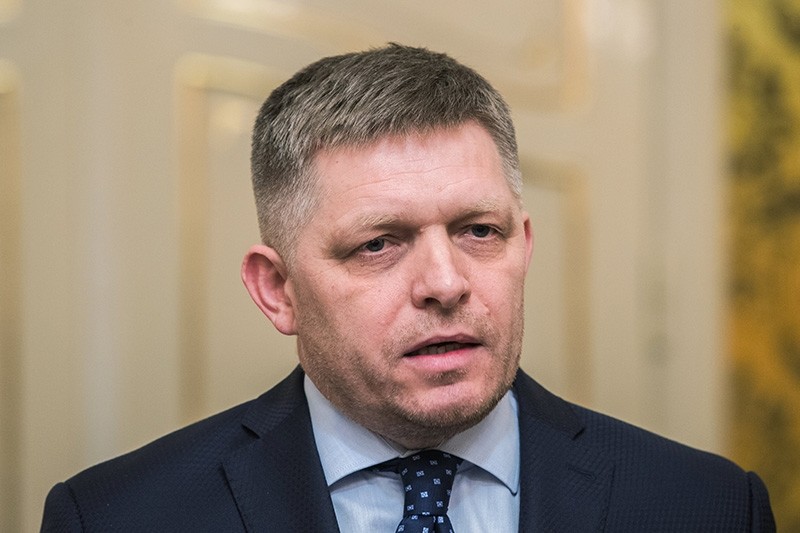 Prime minister and chairman of the SMER party Robert Fico during the press conference where he offered his resignation, in Bratislava, Slovakia, March 14, 2018. (EPA Photo)
by Compiled from Wire Services Mar 14, 2018 12:00 am

Slovakia's prime minister says he's ready to resign as a way out of the political crisis triggered by the slayings of an investigative journalist and his fiancee.

"Today I have offered my resignation to the president of the republic," Robert Fico said. "If the president accepts it, I am ready to resign tomorrow."

Fico, 53, has been struggling since February with a scandal over the killing of journalist Jan Kuciak and his fiancee.

The killing had sparked protests against Fico's government, with tens of thousands of Slovaks turning out for rallies.

The prime minister's three-party coalition government was facing a no-confidence vote by lawmakers scheduled for next Monday.

Interior Minister Robert Kalinak had already resigned two days ago in a bid to save the government from collapsing.

But a minor member of Slovakia's three-way governing coalition, the Most-Hid party, raised the pressure further, calling for early elections.

Fico has resisted the call for snap polls. He warned the country could "plunge into chaos if the current opposition takes power."

Kuciak and his fiancee Martina Kusnirova, both 27, were found shot dead on Feb. 25 at their home near the capital Bratislava.

Police said Kuciak's death was "most likely" related to his investigation on ties between Slovakia's top politicians and Italy's 'Ndrangheta mafia.

The murder and Kuciak's article, published after his death, sparked a wave of anti-government sentiment in Slovakia, an EU and NATO member of 5.4 million people.

Fico's close aide Maria Troskova was alleged to have links to one of the Italians named in Kuciak's story.

The EU urged Slovakia to swiftly investigate the murder.

"The top priority for all of us must be to carry out an independent and thorough investigation of the facts and bring those responsible to justice," the EU's security commissioner Julian King told MEPs in Strasbourg on Wednesday.

"We call upon the Slovak authorities to do this quickly."

The killing of Kuciak and Kusnirova raised fresh concern about media freedom and corruption both in Slovakia and Europe.

It followed the assassination in October of investigative journalist Daphne Caruana Galizia who had denounced corruption in Malta.