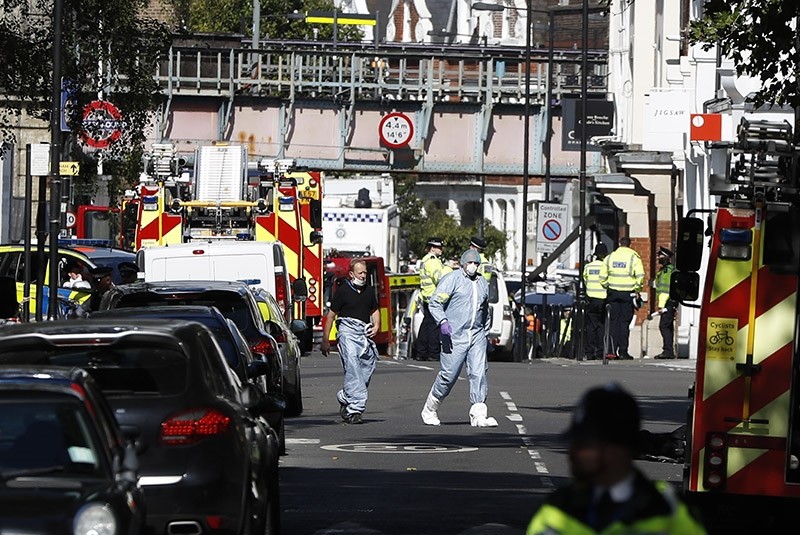 In this Friday, Sept. 15, 2017 file photo, police forensic officers walk within a cordon near where an incident happened, that police say they are investigating as a terrorist attack, at Parsons Green subway station in London. (AP Photo)
by Mar 16, 2018 12:00 am

An Iraqi teenager, who had come to Britain as an asylum seeker, was found guilty on Friday of attempted murder after detonating a homemade bomb on a packed rush-hour London commuter train, injuring 30 people, prosecutors and police said.

Ahmed Hassan, 18, was found guilty of trying to murder the passengers on board an underground train heading to central London on Sept. 15 last year, prosecutors said.

The bomb went off at Parsons Green station and flames engulfed the carriage, but it did not fully explode, limiting the scale of injuries in what authorities said was Britain's fifth major attack of 2017.

"It was only a matter of luck that the device did not work as he intended or it could easily have led to the loss of innocent lives," said Sue Hemming from Britain's Crown Prosecution Service.

Hassan, who the court heard had spoken of his duty to hate Britain because of the deaths of his parents in Iraq, had been placed under Britain's counter-radicalization program at the time.

"On the face of it, Hassan was engaged on the program. But coming back to his devious nature, he kept it very secretive in relation to what he was doing, what he was planning, and nobody around him actually knew what his plot was."

Haydon said a review of the counter-radicalization program would now be undertaken.

On the day of the attack, the teenager left his foster home in Sunbury-on-Thames in west London and set the timer for the device, made with the highly volatile triacetone triperoxide (TATP) - known as "the mother of Satan", in toilets at Wimbledon station where he boarded a District Line underground train, police said.

He got off at the stop before Parsons Green leaving behind his bomb which was placed in a bucket. It was packed with more than two kilograms of metal shrapnel including screws, bolts, nails, knives and screw drivers, the court heard.

There were 93 passengers in the carriage when it detonated. They reported hearing a loud bang and seeing a fireball with one woman suffering burns to her hands, legs, and face causing her to lose the hair on her eyebrows and eyelashes. Others were hurt in a stampede to flee the scene.

Hassan was arrested in the southern port of Dover the following day carrying 2,320 pounds in cash and a new phone.

The court heard he arrived in Britain in the back of a lorry in 2015, claimed asylum and was placed with foster parents in Sunbury. He told British officials that he had been taken by force by Daesh terrorists, who had threatened to kill his family members, and had given him military training.

Britain said at the time there was no evidence to suggest Daesh was responsible for the Parsons Green attack despite the group's claims of responsibility.

Police and prosecutors said his motive was unclear. A teacher and a youth worker told the court Hassan had seemed confused and angry, and that he believed his father had been killed by U.S. bombing.

Hassan admitted to police he had made the bomb but said he had never intended to kill and merely wanted attention. He had pleaded not guilty to charges of attempted murder.

He told the court that he had been attracted to the idea of being a fugitive, chased across Europe by the police and Interpol.

However, the jury at London's Old Bailey court convicted him of attempted murder and he will be sentenced at a later date.