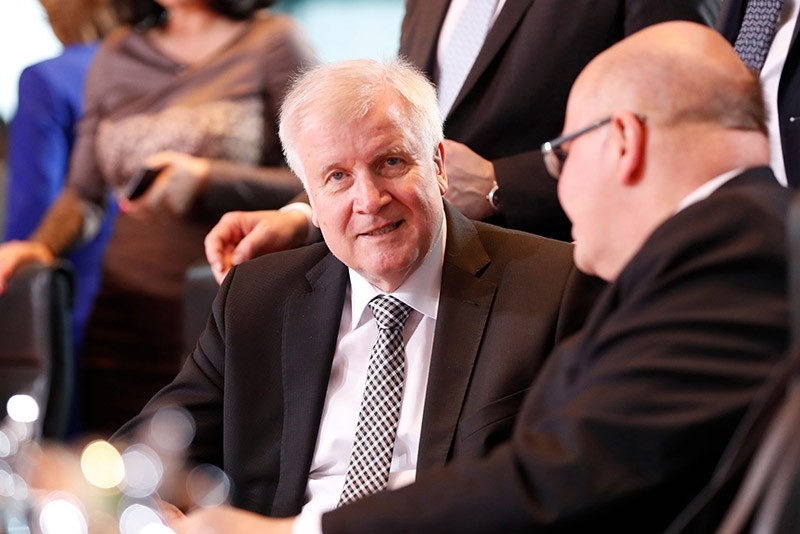 German Interior Minister Horst Seehofer (L) talks with German Economy Minister Peter Altmaier during the first cabinet meeting of the newly appointed ministers at the chancellery in Berlin on March 14, 2018. (AFP Photo)
by Compiled from Wire Services Mar 16, 2018 12:00 am

Islam is not part of Germany, but Muslims are, new Interior Minister Horst Seehofer has said in direct contradiction of Chancellor Angela Merkel.

"Islam is not part of Germany. Germany has been forged by Christianity. Part of that is free Sundays, church feast days and rituals like Easter, Whitsun and Christmas," the head of the Christian Social Union (CSU) party told Friday's Bild tabloid.

"The Muslims who live here are naturally part of Germany. That does not of course mean that because of that for some false reasons of consideration that we give up our country-specific traditions and customs," the former Bavarian premier told the daily.

"Islam is part of Germany" was originally said by former German president Christian Wulff in 2010, but Merkel repeated the phrase often and made it her own; it is now mostly associated with her.

Despite being a close ally of the chancellor, Seehofer has been a vocal critic of her pro-immigrant stance.

Seehofer said he wants to convene Islam meetings to discuss the problems that Muslims experience integrating into German society.

"We have to sit down with the Muslim associations round one table and seek out a dialogue and, where necessary, expand it," he said.

"My message is: Muslims have to live with us, not next to or against us. In order to achieve that, we need mutual understanding and consideration. That can only be achieved when we speak to each other."

Later on Friday, Merkel said that Muslim residents and their religion are part of Germany, hitting back at Seehofer's comment who questioned Islam's place in the country.

Germany's 4 million Muslims "also belong to Germany, just like their religion belongs to Germany," said Merkel, who has often clashed with her new interior minister on the topic of immigration from Muslim countries, as reported by DPA. "We must do everything we can to make coexistence between the religions as positive as possible," she said.

Seehofer's provocative comments come just 48 hours after Merkel was sworn in for a fourth term with a new right-left "grand coalition" government. The outspoken Seehofer, leader of the Christian Social Union (CSU), the Bavarian sister party of Merkel's Christian Democrats, is new to the cabinet. His expanded interior super-ministry also covers "Heimat" or homeland affairs, intended to recapture claims to patriotism and national identity from the far-right Alternative for Germany (AfD) party. The AfD's campaign in last year's election — which saw the party win seats in the national parliament for the first time — included the statement that Islam was not a part of Germany. The AfD for its part welcomed the remarks, with its Saxony state leader Andre Poggenburg claiming that Seehofer had "quoted word-for-word from our platform."

Seehofer's comments are likely to prove divisive in the fledgling coalition, which only came together when the reluctant Social Democrats (SPD) got on board after months of political paralysis. The premier of Lower Saxony, Stephan Weil of the SPD, dismissed Seehofer's claim and accused him of sparking "a completely superfluous controversy" for Merkel.