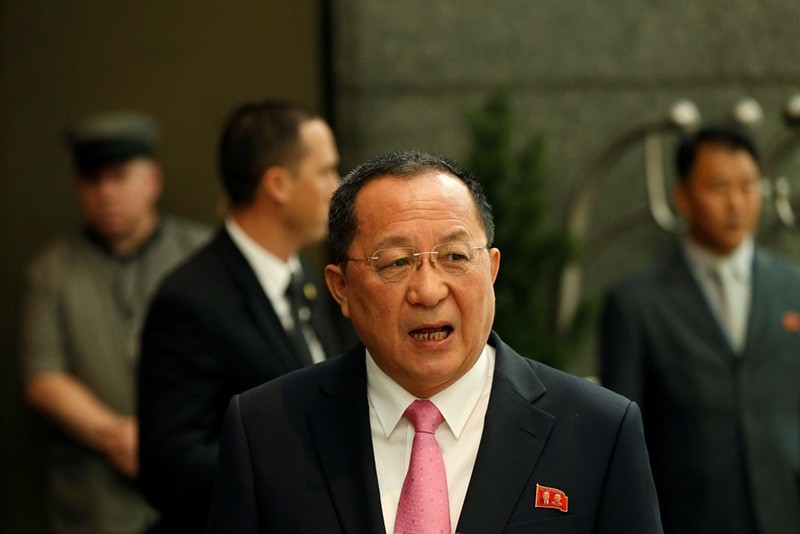 North Korea's foreign minister held talks with Swedish officials on Friday amid reports the Scandinavian nation could help pave the way for a proposed summit between Donald Trump and Kim Jong Un.

Swedish officials said the Stockholm talks would focus on the denuclearization of the Korean peninsula and a possible Trump-Kim summit.

Sweden has longstanding ties with North Korea. Its diplomatic mission in Pyongyang, which opened in 1975, was the first Western embassy established in the country.

Ri and Wallstrom dined together at the foreign ministry on Thursday evening, then met again on Friday at Villa Bonnier, a lavish building used by the government for official functions, which is located near the U.S. embassy.

"It was a good and constructive atmosphere. We'll see what happens next," Wallstrom told reporters after the talks concluded.

Ri made no comment as he left. He also met with Prime Minister Stefan Lofven earlier Friday.

"If we can use our contacts in the best way, we will do so," she said, noting the situation on the Korean peninsula was "of interest to us all" in terms of security.

Some Swedish and foreign media have said that Ri -- who was stationed at North Korea's embassy in Stockholm in 1985-1988 -- will stay in the Scandinavian country until Sunday for other talks, though Swedish officials would not confirm those reports.

"We can't rule out the possibility of a contact between the North and the U.S." during Ri's visit, a Beijing source told South Korea's Yonhap agency.

Meanwhile, Swedish public broadcaster SVT said the Stockholm International Peace Research Institute (SIPRI) was involved in the talks, though SIPRI did not return AFP's calls for a comment.

Sweden's foreign ministry has refused to comment on that possibility, saying only that the talks would "focus on Sweden's consular responsibilities as a protecting power for the United States, Canada and Australia."

"They will also address the security situation on the Korean peninsula, which is high on the (U.N.) Security Council agenda," a ministry statement said. Sweden is currently a non-permanent member of the Security Council.

"The aim of the visit is to contribute to the effective implementation of the resolutions" voted by the Security Council against Pyongyang over its nuclear program, as well as those calling "for intensified diplomatic efforts to find a peaceful solution to the conflict."

After months of tension and warmongering over Pyongyang's nuclear program, Trump has agreed to a summit proposal relayed by South Korean envoys who met Kim Jong Un in Pyongyang.

But no specific time or venue has been set and North Korea has yet to confirm it even made the offer to meet.

Speaking in Berlin on Friday, Lofven said that if Sweden "can serve as a facilitator to bring about results, then we will, of course, do that."

TBS said Abe told Moon he wanted North Korea to not only suspend nuclear and missile testing, but also accept IAEA inspectors on its soil. He also asked Seoul to raise the issue of Japanese nationals abducted by the North.

And according to Yonhap, Moon stressed that improvement in Pyongyang's ties with Tokyo and Washington was needed to help end the crisis with North Korea.

Moon also spoke with Trump on the phone on Friday, Yonhap reported.