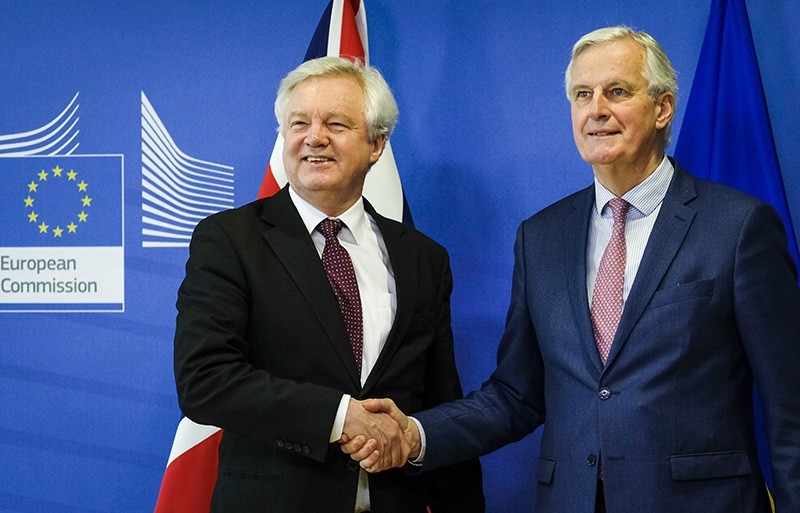 The European Union and Britain have agreed on the terms of a post-Brexit transitional period, EU chief Brexit negotiator Michel Barnier said Monday.

Barnier told reporters that the negotiators working day and night recently had agreed on "a large part of what would constitute the orderly withdrawal of the United Kingdom."

With Britain set to exit the EU in March 2019, the transition period is meant to provide companies and citizens with certainty right after Brexit and allow enough time for Britain to put post-Brexit systems in place.

The agreement foresees keeping all EU rules in place in Britain until the end of 2020.

British envoy David Davis hailed the progress in Brexit talks in recent days as a "significant step" toward a final deal.

Davis told reporters in Brussels that he is confident that the progress will be endorsed by European Union leaders when they meet on Thursday and Friday.

He also said the two have agreed to set up "a joint committee" to resolve any disputes during the two-year transition period.

The parties also agreed that there must be a "backstop" solution to ensure that there is no hard border between Northern Ireland and Ireland, according to the draft text of the Brexit treaty published Monday. The border between EU member state Ireland and Britain's territory Northern Ireland issue is central to an agreement but negotiators are struggling to find a way to keep people, goods and services flowing while respecting EU controls.

Dublin is concerned at London's rejection of a "backstop" arrangement set out as a separate protocol in the EU's draft of the withdrawal treaty. Under this, Northern Ireland would effectively submit to EU economic rules and so become potentially isolated from the British mainland.

"With respect to the draft protocol on Ireland/Northern Ireland, the negotiators agree that a legally operative version of the "backstop" solution for the border... should be agreed as part of the legal text of the Withdrawal Agreement, to apply unless and until another solution is found," a preamble to the draft text said.

The text made clear that Britain had not agreed to the specific proposal made by the European Union.

The European Automobile Manufacturers' Association, or ACEA, said it's concerned about whether cars approved by U.K. authorities can still be sold in the EU after Brexit and vice versa. It called for both sides to recognize each other's vehicle approvals.

It also said any new customs checks "would add cost, cause delays and threaten productivity."