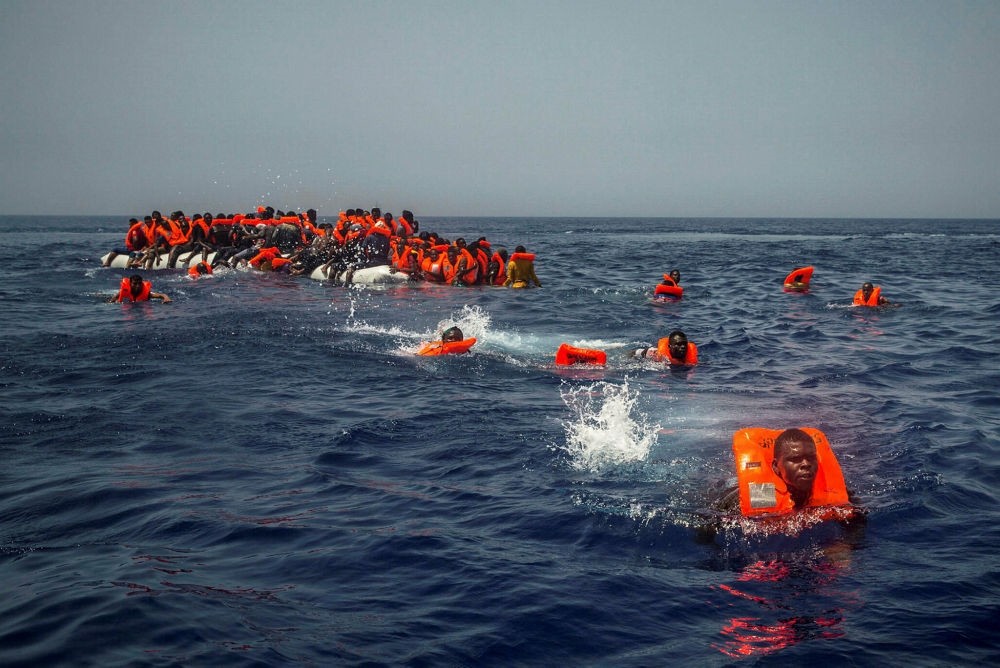 African migrants try to reach a Spanish NGO Proactiva open arms rescue ship from a punctured raft in the Mediterranean Sea, July 23, 2017.
by Compiled from Wire Services Mar 21, 2018 12:00 am

A Spanish aid group accused Italian authorities of putting humanitarian operations in the Mediterranean at risk, after its migrant rescue boat was impounded on suspicion it was aiding illegal immigration.

"Today it seems that solidarity has become a crime," said Open Arms co-founder Oscar Camps at a press conference in Barcelona, as reported by Agence-France Press (AFP). "What is being done is the blocking of intervention of humanitarian organizations at sea. There are fewer and fewer NGOs doing this work and the objective is that there are none left," he said.

Italian authorities seized a charity's ship on suspicion it had helped illegal immigration by picking up migrants in the Mediterranean instead of letting Libya's coastguard take them back to North Africa.

Mission chief Anabel Montes, speaking by video conference from the impounded Open Arms vessel, said armed Libyan coast guard members made death threats to the aid workers. "We had never reached such an extreme situation like this one in which they were threatening us, saying that they were going to kill us," Montes said.

Italian authorities have not publicly explained why the Open Arms was impounded and its crew members were being investigated on suspicion of aiding illegal immigration. In an order to seize the rescue boat, Catania prosecutors alleged the crew ignored the Italian coast guard's suggestion to request permission to dock in Malta, Italian news agency ANSA reported, according to AP. The prosecutors said Proactiva and its aid workers seemed to have "the only purpose of reaching Italy," ANSA said, quoting the order.

Proactiva released footage that it said showed a young boy sitting in his father's lap on its ship after the rescue. "He would have never forgiven us had we returned him to hell," Camps said on Twitter. The United Nations has said migrants - hundreds of thousands of whom remain in Libya - face dire conditions there. Those who make the crossing tell of being extorted, beaten, tortured, raped, starved and forced to work for no pay.

The case highlighted an increasingly tense stand-off between humanitarian groups seeking to save lives on the open seas and authorities across Europe trying to stop people from making the dangerous crossing in the first place. It also comes at a sensitive time in Italy after voters this month backed parties that took a hard line on immigration and promised to deport hundreds of thousands of irregular migrants already living there.

It is the second time Italy has seized a rescue vessel. A German ship, the Iuventa, was impounded in August on accusations it had aided illegal immigration. The group, Jugend Rettet, also denies the charges and is seeking to get the ship back.

Italy has agreed to hand over full responsibility for sea rescues across about a tenth of the Mediterranean to Libya's coast guard by 2020. The country has been on the frontline of boat migrant arrivals for the past four years, when more than 600,000 migrants have reached the country's shores.

The issue has become increasingly politicized across Europe. Both Hungary and Poland are refusing to take in EU quotas of migrants. German Chancellor Angel Merkel lost ground to anti-immigration parties in last year's election, partly as a result of her decision to let in hundreds of thousands of refugees in 2015.

Vincent Cochetel, the U.N. refugee agency's special envoy for the central Mediterranean, said on Twitter he hoped the case did not mark a return of what he called "the campaign we saw in 2017 against NGOs involved in rescue-at-sea."

Italy last year demanded that NGOs which operate rescue vessels sign on a code of conduct, but some humanitarian organizations declined to do so. Among their objections was a provision that would allow armed police on board rescue vessels. A few others, including Proactiva Open Arms, did sign on and continued to operate migrant rescue missions at sea. Some aid groups decided to suspend Mediterranean rescue missions because of what they described as an increase in hostility from the Italian-backed Libyan coast guard, including incidents in which the Libyans fired upon rescue boats.