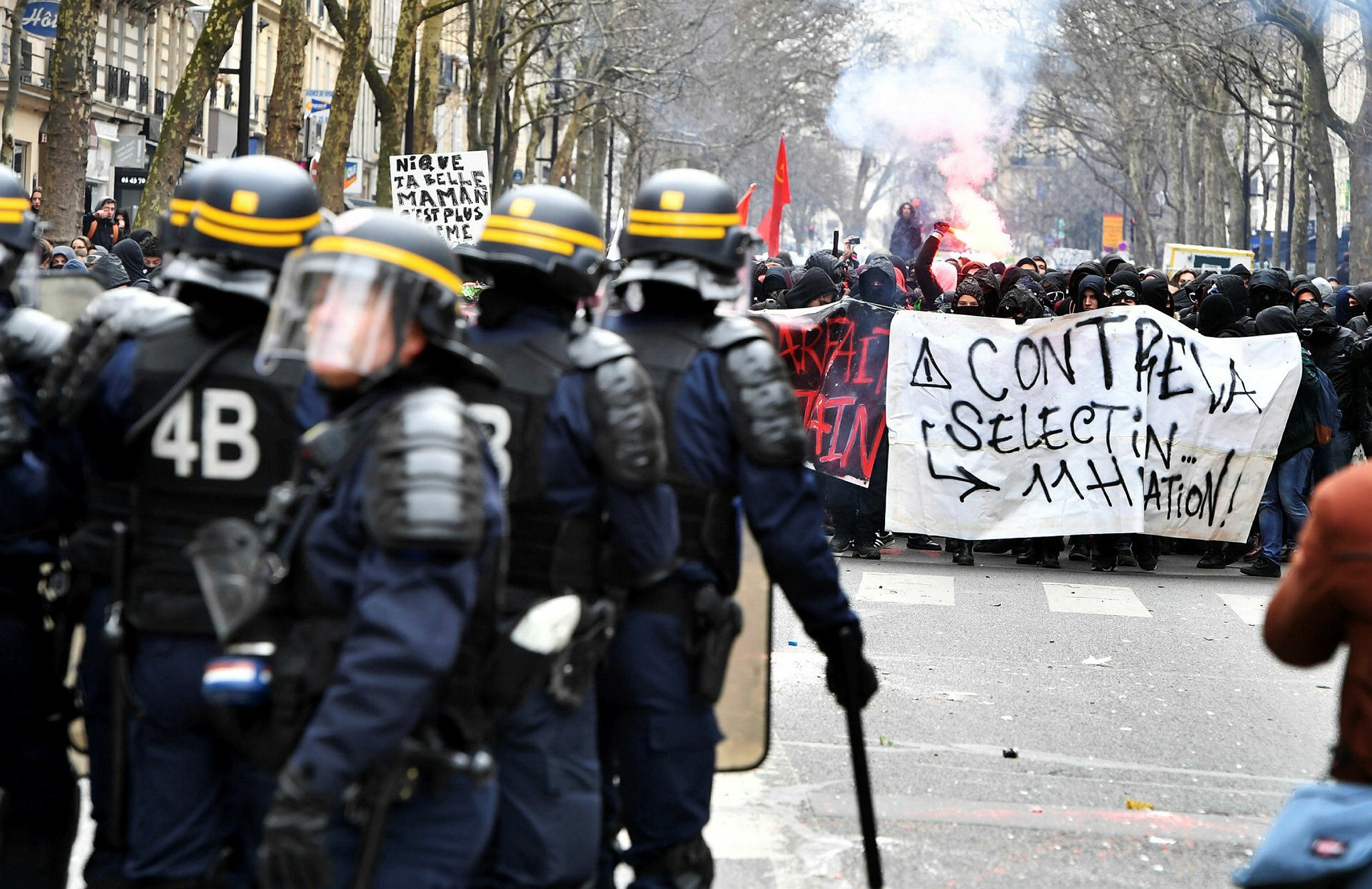 Students face riot police during a demonstration as part of a nationwide day of protest against the French president, March 22.
by Daily Sabah with Wires Mar 23, 2018 12:00 am

Police scuffled with protesters in Paris and fired teargas and water cannon in the western city of Nantes as strikes broke out across France yesterday in a challenge to President Emmanuel Macron's economic reforms. While unions have struggled to rally crowds over the past months, this is the first protest against Macron bringing together public sector workers and railway staff, potentially spelling trouble for the government ahead of a rolling rail strike.

The date of March 22 also signifies the beginning of nationwide protests back in 1968 in which France was hit by the violent clashes with police in the streets of Paris, strikes and occupations of factories and public buildings.

Train conductors, teachers and air traffic controllers walked out to join more than 150 marches in cities and towns - the first time public sector workers have joined rail staff in protests since Macron came to office in May. Sixty percent of fast trains, 75 percent of inter-city trains and 30 percent of flights to and from Paris airports were cancelled because of the strike. About 13 percent of teachers walked off the job, the education ministry said, closing many primary schools.

Public servants are angry over pay that hasn't kept up with inflation, while unions accuse Macron of wanting to take a sledge-hammer to the public sector. FSU union official Bernadette Groison said the reforms would herald "the end of the social model we know today, with public services that have been broken apart," as reported by AFP.

Macron has pledged to cut 120,000 public jobs and his government has raised the prospect of voluntary redundancies, prompting fears that the quality of services will take a hit. Plans to use more contractors and increasingly offer pay based on merit, rather than on experience, are seen by unions as attacks on traditional job security.

On the railways, plans to strip new recruits of a guaranteed job for life and other benefits have riled unionists who also fear that a restructuring of the SNCF could eventually see it privatized.

Macron's opponents oppose plans to use presidential decrees to pass the rail reforms, a bid to avoid lengthy parliamentary debate that critics say is undemocratic. He already used this strategy to pass labor reforms in September which loosened France's famously strict regulations on hiring and firing workers.

Macron has stayed sanguine through criticism over his reforms, insisting he was elected on a mandate to shake France up. "We're never happy when things change, yet we want things to change -- that's the paradox of France," he tweeted last week.

The president argues the public sector is too bloated and he is keen to trim spending and balance France's national budget by the end of his term, for what would be the first time since the 1970s. His government says the behemoth rail operator in particular is crying out for reform, saddled with 46.6 billion euros ($57.3 billion) of debt.

The SNCF runs trains at a 30 percent higher cost than European neighbors, the government says, arguing it is urgent that it becomes more efficient as EU countries prepare to open passenger rail to competition by 2020.