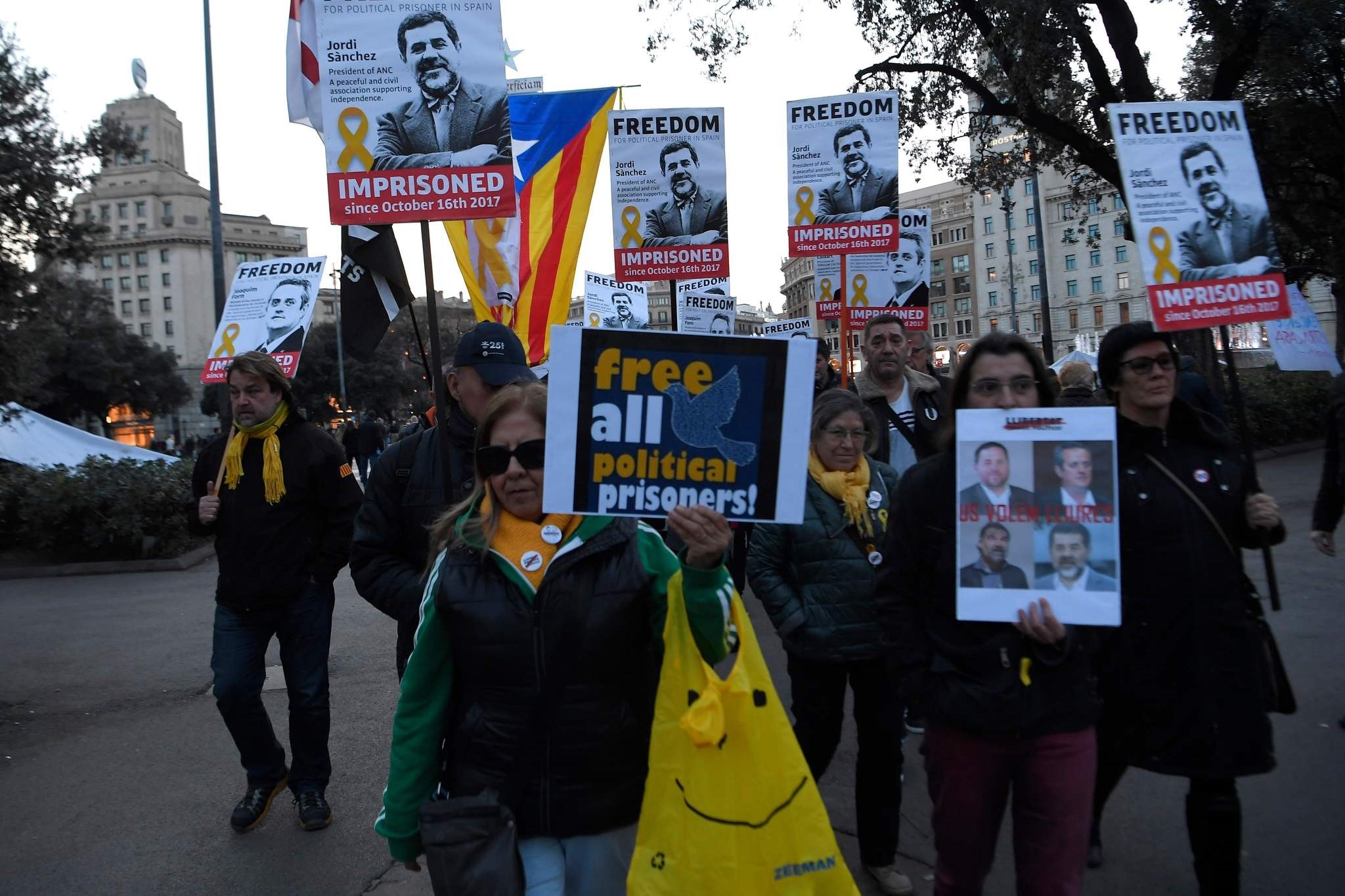 A Spanish Supreme Court judge charged 13 Catalan separatist politicians with rebellion Friday for their attempts to make the region independent of Spain, dealing a heavy blow to the secessionist movement with an indictment that could put its political elite behind bars for decades.

Judge Pablo Llarena ordered five of the Catalan politicians who answered a court summons Friday to be held without bail. Another of the summoned politicians, the ERC party's Marta Rovira, did not heed the order and announced in a letter she was fleeing the country to live "in exile."

The judge did not immediately give instructions for European and international arrest warrants to be activated for seven fugitive Catalan politicians, including former regional president Carles Puigdemont, or for Rovira.

Those warrants could come in the next hours or days, court officials told The Associated Press.

The charges of rebellion stem from an illegal independence declaration by the Catalan parliament last October. Rebellion is punishable with up to 30 years in prison.

The jailings are likely to cause outrage in Catalonia, where many supporters describe the Catalan officials in custody as "political prisoners." The pro-independence civil society group ANC called for marches late Friday in towns across the region.

The separatist movement in Catalonia, a wealthy region of 7.5 million in northeast Spain, has ignited Spain's biggest constitutional crisis in decades. The indictment Friday appeared to scotch hopes of breaking the political deadlock and installing a new Catalan government any time soon.

Pro-independence political parties and civic groups in Catalonia have defied the Spanish government for the past six months with efforts to secede from Spain and create a new republic. They have repeatedly fallen foul of the courts and the Constitution, however.

Polls show Catalans are equally divided on the secession issue, although a vast majority support holding a legal referendum on the issue.

Legal and political constraints have prevented the slim separatist majority in Catalonia's parliament from electing a regional president and government since a December election. The latest failure, on Thursday, started a two-month countdown for either a government to be formed or for another ballot in the restive region.

One of those jailed Friday was former Catalan government minister Jordi Turull, the third candidate since the December election to become Catalan president. Turull failed to gain enough votes from regional lawmakers on Thursday, but in theory had a second chance to be voted in Saturday by a simple majority.

It was immediately unclear if Saturday's parliamentary vote could go ahead without Turull's physical presence.

Spanish Prime Minister Mariano Rajoy declined to comment on the legal issues but said he is not enthusiastic about calling another regional election in Catalonia. Rajoy said he doesn't like repeat elections, explaining that "people vote and politicians have a duty to resolve problems and not create others."

In his ruling, Llarena said 25 Catalan separatists in all will be tried for rebellion, embezzlement or disobedience.

Puigdemont appeared unshaken by the charges.

He also criticized the judge's decision, suggesting Llarena was influenced by the political climate.

"It is not right for a judge to do politics," Puigdemont said.

In explaining his decision to bring charges, Llarena said Catalan separatist politicians and groups had plotted ways of achieving Catalonia's independence for the past six years.

Llarena described the case as "an attack on the constitutional State ... of unusual gravity and persistence."

His ruling also warned that the strategy to secede is "dormant and awaiting resumption" once separatists regain control of the regional Catalan government.

The semiautonomous region has been without a leader for nearly five months after central authorities in Madrid took control following October's independence declaration.