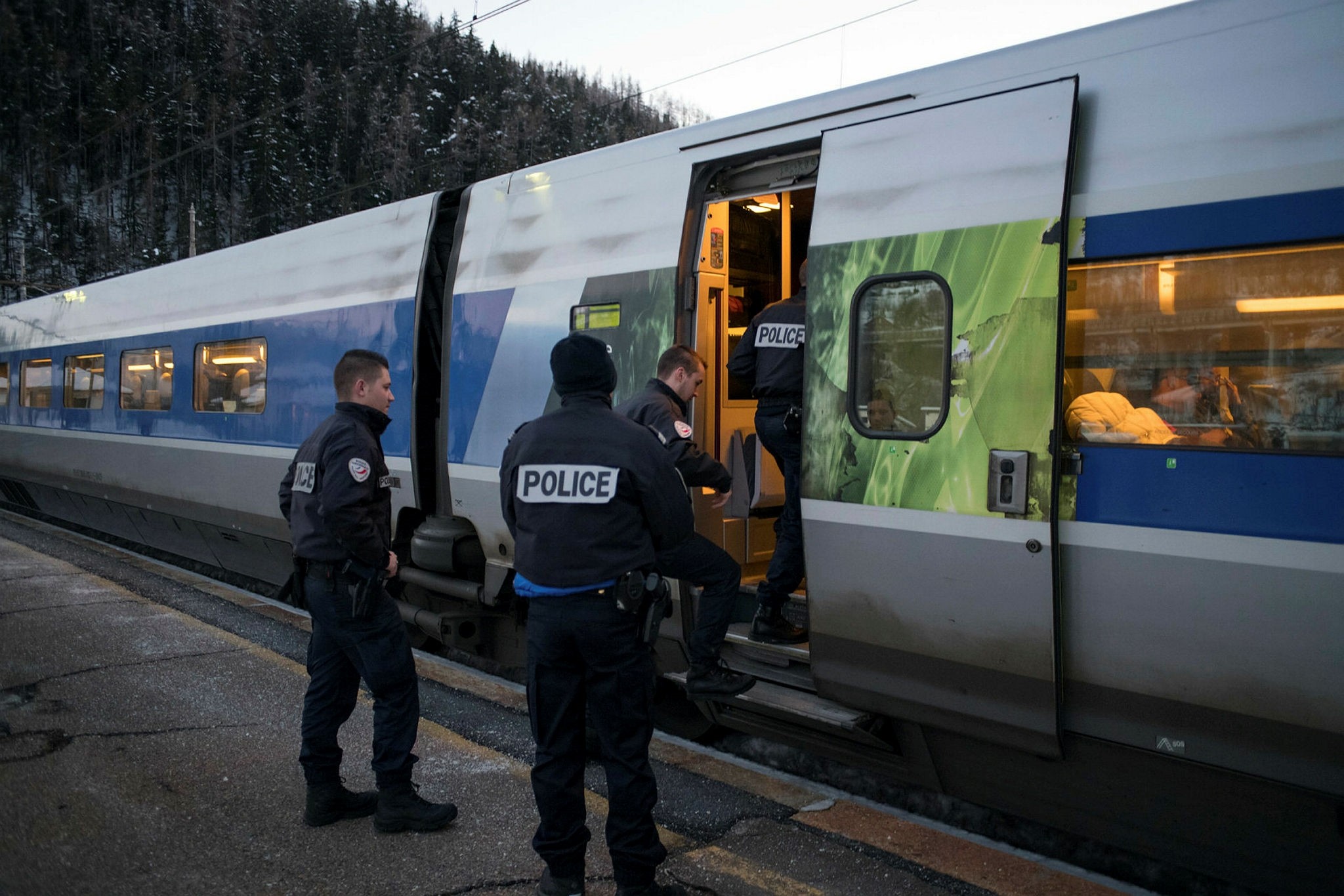 French police officers board a TGV train bound from Milan to Paris to inspect passengers and look for illegal immigrants, Jan. 12.
by Compiled from Wire Services Apr 02, 2018 12:00 am

The episode on the Franco-Italian border angered many politicians, some of who saw it as a violation of Italian territory.

The Italian foreign ministry, which had earlier summoned the French ambassador for an explanation, said in a statement that it had conveyed the Rome government's "firm protest for the behavior of the French customs agents, which was unacceptable."

The NGO, Rainbow for Africa, said that on Friday evening the French brought a Nigerian immigrant to the railway station of the Italian border town of Bardonecchia.

The nongovernmental organization said they entered the clinic, which is in the train station, and conducted a urine test on the man because they suspected him of drug trafficking.

The foreign ministry said France had been told earlier this month that the station was no longer accessible for its police because it was now being used for humanitarian purposes.

In their account of the incident, French customs said they had the written consent of the man for the test and the had also given them permission to use the facilities for it. The test was negative.

French customs said they had followed regulations and were ready to clarify with the Italians any legal and operational procedures to avoid future incidents.

The Italian Foreign Ministry demanded on Saturday that Paris explains the "serious act," which runs contrary to "the framework of collaboration between border states."

Massimiliano Fedriga of the right-wing League, which made big gains in recent elections, said the French had made Italy look like the laughing stock of Europe.

"French police do whatever they want on Italian territory without being disturbed, as if they are at home. What happened in Bardonecchia is grave and shows how our so-called friends in Europe have little or no consideration for us," he said in a statement.

A member of the Italian parliament for the Brothers of Italy Party, Augusta Montaruli, said the behavior of the French border agents was a sign of "an unprecedented lack of respect towards Italy."

"We are not Macron's toilet," Montaruli concluded.

The Italian people have grown increasingly discontent with the mass immigration problem, accusing not only their government but also the European Union.

Mayors around the country are also protesting the government, saying that they already have significant problems to deal with, including unemployment and crumbling infrastructure.

Mayor Vincezo Lionetto Civa of the small town of Castell'Umberto launched a protest with hundreds of his fellow citizens against the government's decision to relocate many immigrants in a local hotel.

Castell'Umberto only has a population of 3,200 people.

"The prefecture didn't tell us in advance that the immigrants were coming […] That's why some people around here are angry because the government chose to invest money into the relocation of migrants instead of providing the town with additional funds," Mayor Civa said.

Weeks after the protests broke out the immigrants are still housed in the local hotel. They originate mainly from Nigeria, Niger, Guinea and Burkina Faso, prompting the mayor to rightly say that they are not even legitimate war refugees but illegal economic immigrants.

Even pro-refugee/immigrant locals are expressing severe doubt as to whether housing the immigrants in the hotel was the right choice. "The risk is that the shelter could turn into a ghetto," a lawyer representing the community said.

While the actions of the French border agents may seem regrettable if they are deemed to be illegal, Frenchmen are facing very similar problems regarding immigrants, even in Paris.