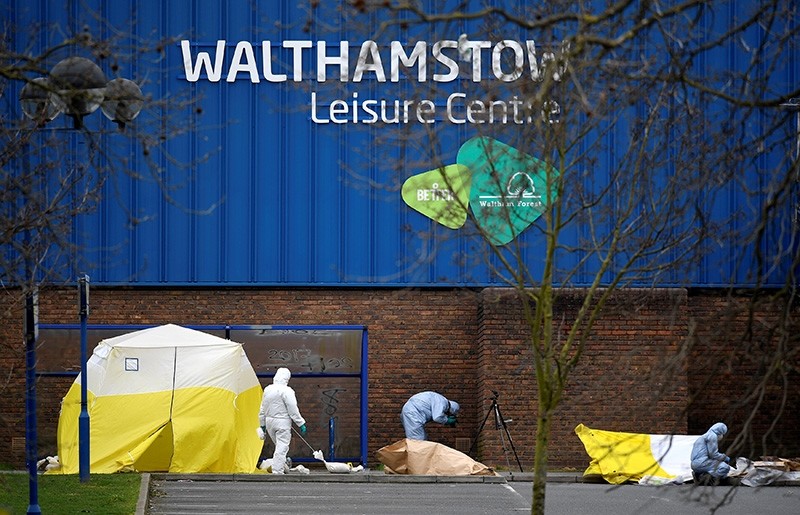 Forensic investigators examine the scene around Walthamstow Leisure Centre, where a teenage boy was shot, in London, Britain, April 3, 2018. (Reuters Photo)
by Apr 04, 2018 12:00 am

Another deadly night in London is putting pressure on political leaders, as a surge in violence on the streets of the British capital pushes its murder rate higher than New York's.

Two teenagers were fatally shot and another was stabbed in the northeast of the city on Monday night.

Some are blaming budget cuts for the spate of attacks.

Larry Logan, a former police superintendent in east London, told AFP the city is facing "a perfect storm" of reduced police numbers and "decimated" social services due to funding cuts.

He said "overworked" detectives are retiring or quitting as they struggle with the caseloads.

Citing a recent conversation with a homicide detective, he said: "in his 35 years, he's never known it so overwhelming... they're just leaving in their droves."

David Lammy, the local MP in Tottenham where one of the teenagers was killed, said he had requested an urgent meeting with Home Secretary Amber Rudd.

Lammy said the violence was bring driven by drug turf wars and criticized the government's funding cuts for police.

"We need to bring down the gangsters," he said.

London's Metropolitan Police launched 46 murder inquiries in the first three months of 2018 -- including 15 in February and 22 in March.

That is roughly double the number seen in the first quarter of last year and, in the latter two months, more than in New York, a city of comparable size.

It is the first time in modern history that London's homicide rate, which has grown nearly 40 percent in three years, has been higher than New York's.

In the latest violence Monday, a 17-year-old girl was shot dead in Tottenham, north London, in what witnesses described as a drive-by attack.

A 16-year-old boy died in hospital on Tuesday evening, a day after he was shot in the face in northeast London, police said.

A 15-year-old boy who was stabbed in the same incident has been discharged from hospital.

"I fully appreciate the alarm, shock and revulsion caused by this murder and other fatal shootings we have seen across London over the last few months," said Glenn Butler from the Metropolitan Police.

Writing on Facebook, the area's MP Stella Creasy appealed for witnesses over the "horrific and distressing incident".

She noted an order allowing police to search members of the public without suspicion amid the risk of violence had been put in place in the area.

There has been a sharp drop in such stop-and-search activity, with use of the controversial powers at the lowest level since current data records started 17 years ago.

It attracted sustained criticism for targeting ethnic minorities, leading then-interior minister Theresa May, who is now prime minister, to introduce reforms in 2014.

London's mayor Sadiq Khan, who has devolved powers over policing, has also blamed May's government for underfunding the police.

He says the force has faced more than £600 million (688 million euros, $844 million) in central government grant cuts since 2011, leading to the large-scale loss of police staff and facilities.

"Government cuts have decimated services for young Londoners across our city," he wrote on Twitter Tuesday, reacting to a post from Labour MP Dawn Butler criticizing Downing Street.

"You can't protect people on the cheap," she had warned.

A spokesman for Britain's interior ministry insisted the government is taking action "to restrict access to offensive weapons" and "break the deadly cycle of violence."

"The UK has some of the toughest gun laws in the world and we are determined to keep it that way," he said.

Sarah Castro, of Safer London, a charity working to prevent gang violence, said her staff were "shell-shocked" by the recent violence.

She warned against trying to identify one single cause for the spike.

"If we knew, we'd be stopping it," she said. "It's a whole range of different things".

"They think being a man is being hyper-masculine," she added.

"It's either fight or flight -- and invariably it's fight, and they will strike first, whether it's to stab someone or shoot someone," he said.

"That's what we're seeing more and more of."