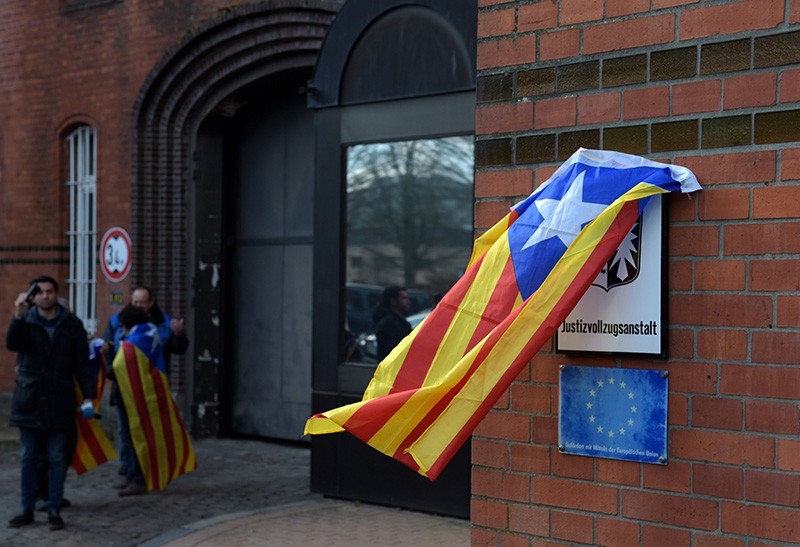 A Catalan Independence flag is fixed at a plaque in front of the 'Justizvollzugsanstalt (JVA) Neumuenster' prison, where former Catalan leader Carles Puigdemont is still detained in Neumuenster, Germany, 06 April 2018. (EPA Photo)
by Compiled from Wire Services Apr 06, 2018 12:00 am

German prosecutors on Friday ordered the immediate release of ex-Catalan leader Carles Puigdemont after he posted 75,000 euros ($92,000) bail, which will allow him to move freely in Germany pending a decision on his extradition sought by Spain.

The Schleswig prosecutor's office said Puigdemont also provided authorities with an address in Germany where he will reside pending the decision.

"No information will be provided about his current whereabouts," prosecutors said in a statement.

Lawyers for Puigdemont had arrived at the Neumuenster prison early Friday but it wasn't immediately clear how and when the 55-year-old would leave jail. Supporters said Puigdemont planned a news conference later Friday.

Puigdemont was detained by German police March 25 after crossing the border from Denmark. Spain is seeking his extradition for rebellion and misuse of public funds in organizing an unauthorized referendum last year on Catalonia's independence from Spain.

The state court in Schleswig ruled Thursday that Puigdemont can't be extradited for rebellion because the equivalent German law presumes the use or threat of force sufficient to bend the will of authorities. He can still be extradited on misuse of funds charges.

After being removed from office by the central government in Madrid following a unilateral declaration of independence on October 27, Puigdemont fled to Belgium.

He was arrested in northern Germany in late March on the way back from a trip to Finland.

Puigdemont and six political allies escaped Spanish authorities in an attempt to draw international attention to their plight.

A Belgian judge on Thursday bailed three of the four former Catalan ministers who fled to Belgium with Puigdemont after they handed themselves in to police there.

Nine other pro-independence figures are currently in custody in Spain, including six members of Puigdemont's Catalan government and the former president of the Catalan parliament.

The German court's decision is a setback for the Spanish judiciary's efforts to crack down on the separatist movement. It is also an embarrassing blow for Spain's conservative government, which has insisted the dispute over Catalan separatism is a legal issue, not a political one, and has refused to be drawn into negotiations with Puigdemont and his supporters since October's banned referendum.

Spain's Deputy Prime Minister Soraya Saenz de Santamaria said the government would respect the German ruling and awaited further details of it before deciding on appropriate action. She also took a swipe at the Catalan pro-independence parties, which the government accuses of flouting the Constitution and disobeying court orders, by adding that Spain is "a state that is shows its character by respecting the decisions of the courts in whatever direction that decision is made."