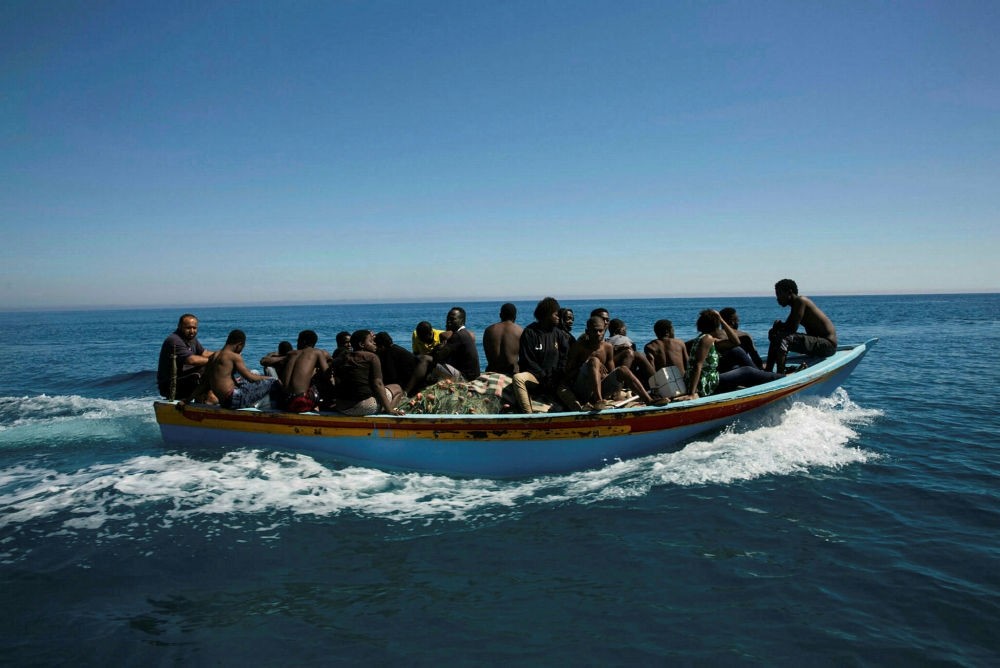 Migrants are transported after being rescued by the Libyan coast guard in the Mediterranean off Tripoli, July 8, 2017.
by Compiled from Wire Services Apr 07, 2018 12:00 am

At least 65,000 migrant smugglers are under investigation as most come from European countries, EU police agency Europol reported

European law enforcement officials say they are tracking at least 65,000 migrant smugglers, twice as many as at the height of the migration crisis three years ago, as the illegal trade booms.

Despite a drop in the number of migrants successfully crossing the Mediterranean - Europe's biggest migration crisis since World War II erupted in 2015, the EU's police agency Europol said demand for smugglers was still "huge."

Many new suspects have also been identified, Europol added, as investigators in European countries track one of the fastest growing forms of international organized crime.

"At the end of last year we had 65,000 smugglers in our data bases," Robert Crepinko, head of Europol's European Migrant Smuggling Centre, told Agence France-Presse (AFP) at his offices in The Hague.

Europol reported in September 2015 there were some 30,000 suspected smugglers before the number jumped to nearly 55,000 by the end of 2016, then some 10,000 more in 2017. Sixty-three percent of those whose nationalities it has identified are from Europe, including 45 percent from Balkan countries, according to Europol figures. Fourteen percent are from the Middle East, 13 percent from Africa, nine percent from eastern Asia and one percent from the Americas.

Crepinko said smuggling is "still a booming business" worth billions of euros despite a drop in migrant arrivals last year following EU cooperation deals with Turkey and Libya, the main gateways to Europe.

People traffickers in Libya have sent hundreds of thousands of migrants to sea over the past four years, but departures have fallen dramatically since July as some local armed groups stopped smuggling and Italy and the European Union helped bolster the Tripoli-based coast guard.

Arrivals in Italy from Libya have dropped more than 72 percent this year from last, official data show. That means many may be trapped in widely lawless Libya for longer periods than before.

The United Nations estimates that hundreds of thousands of migrants remain in Libya. Those who make it to Italy tell of being extorted, beaten, tortured, raped, starved and forced to work for no pay.

Even those in officially sanctioned detention centers or living openly in Libya have next to no access to healthcare and depend on international agencies that have a limited presence on the ground, said Christophe Biteau, Libya head of mission for MSF France.

Libya is currently the main migrant springboard to Europe where reports of enslavement on top of other horrific abuses of sub-Saharan Africans prompted urgent action at an EU-Africa summit in Abidjan in November. Thousands of migrants were quickly repatriated from Libya to their home countries under a deal reached at the meeting. But Crepinko said further law enforcement cooperation depends on obtaining guarantees that human rights will be respected, a challenge when dealing with many African governments. "That's why there will be no quick wins in that," the Europol official said.

Since last year, Europol has been operating on a new legal basis that restricts information it can share with non-EU countries. Italy, the EU's main migrant entry point, agreed in December to set up a crime-fighting cell with Libya's western-backed government in Tripoli. In mid-March, Libya issued arrest warrants for 205 Libyans and foreigners suspected of involvement in a smuggling network for Europe-bound migrants.