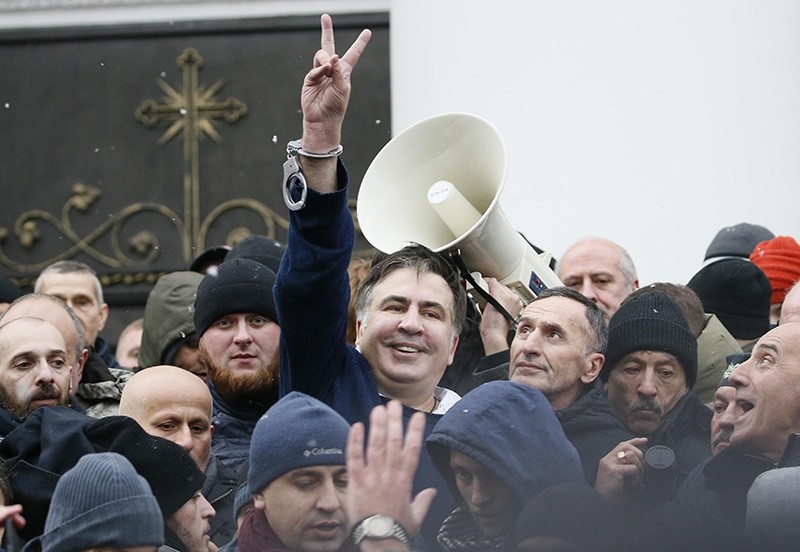 Georgian former President Mikheil Saakashvili flashes a victory sign after he was freed by his supporters in Kiev, Ukraine Dec. 5, 2017 (Reuters Photo).
by Daily Sabah Apr 08, 2018 12:00 am

Former Georgian president and the governor of Odessa, Mikhail Saakashvili has found a job as a lecturer in the Netherlands, but vowed to resume his political career.

In a written statement, Saakashvili said he has signed on with the "Speakers Academy" in the Netherlands, where he was granted residency after being deported from Ukraine and stripped of Ukrainian citizenship.

"I hope that I will not lecturing for long, and use my experience not for lectures, but for the removal of oligarchs from power and the real reformation," Saakashvili said.

The 50-year-old politician remains a controversial figure in eastern European politics. His supporters praise his anti-Russian and anti-oligarch stance, while his opponents accuse him of mass corruption and being a political tool for U.S. policies in Eastern Europe and the Caucasus.

Saakashvili was the leader of mass protests dubbed as the "Rose Revolution" in 2003 that removed former President Eduard Shevardnadze who had led Georgia since its independence from the Soviet Union in 1992. A series of mass protests resulting in the replacement of autocratic pro-Russian regimes known as "Color Revolutions" – reportedly backed by various NGO's funded by the EU and the U.S. including Open Society Foundations founded by billionaire George Soros – also took place in Russia's sphere of influence in early 2000's, including in Yugoslavia, Ukraine and Kyrgyzstan in 2000, 2004 and 2005, respectively, prompting Russia to adopt a more hardline stance in regional politics.

Saakashvili was elected president in January 2004 and held this post until late 2013. While his first term was praised for reforms and economic growth, Saakashvili's second term was marked by an invasion from Russia – triggered by his controversial ethnic policies and Russian aim to show muscle in the region – social unrest and corruption allegations.

Facing multiple probes at the end of his term, Saakashvili left Georgia and came to Ukraine, which soon faced pro-EU protests and toppling of pro-Russian President Viktor Yanukovych in 2014. As an ally of incumbent President Petro Poroshenko, he was appointed governor of the southern Odessa region. He resigned from that post in 2016 and harshly criticized Poroshenko for failing to stem corruption.

Saakashvili was stripped of Ukrainian citizenship while he was abroad in July 2016, paving the way for his possible extradition to Georgia where he is wanted on multiple charges. But he forced his way back into the country from Poland in September. He led repeated protests against Poroshenko, including threatening to jump off a building in December 2017. He was arrested by security forces, only to be released by his supporters blocking a police van.

In February, Saakashvili was deported from Ukraine to Poland after being detained by armed, masked men at a restaurant in Kiev and rushed to the airport in an incident dubbed as kidnapping by himself and his supporters.

He was permitted into Poland as the spouse of a European Union citizen since Saakashvili's wife is Dutch, a fact which also aided him in the process of obtaining a residence permit.