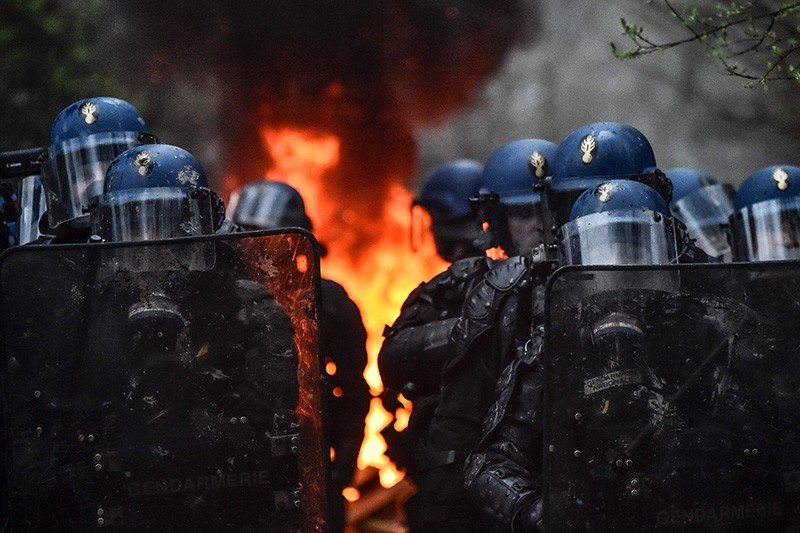 Police riot stand near a barricade in fire during an operation to evict environmental protesters from the site, known as ZAD (AFP Photo)
by Compiled from Wire Services Apr 09, 2018 12:00 am

A police officer has been injured amid skirmishes with activists during the evacuation of a French protest camp erected nearly a decade ago to block construction of an airport in western France.

The national gendarme service said the injured officer was hit in the eye with a flare and is not in life-threatening condition. It said one person has been arrested and scattered clashes occurred after 2,500 police moved into the site in Notre-Dame-des-Landes early Monday.

The French government in January abandoned plans for the airport after 50 years of debate, and gave squatters until spring to clear out.

But about 100 stayed in place, seeking to turn it into a "space of social, environmental and agricultural experimentation."

An unlikely combination of environmental activists, farmers and anarchists converged on the camp that sprang up in 2009.

French police fired teargas and stun grenades and were pelted with stones during a dawn swoop to clear eco-activists and anarchists from the planned airport site.

Some 2,500 police took part in the evacuation which authorities said started at 6 a.m. (0400 GMT). Police had already blocked surrounding roads as early at 3:30 a.m., a Reuters journalist saw, while protesters set fire to barricades.

One police officer sustained an eye injury and a protester was arrested, said a police official who described the clashes as sporadic and relatively minor.

Ministers said the squatters had been ordered to leave after they had succeeded in getting the airport project halted. "We want to put an end to a lawless zone," the Interior Ministry said in a statement.

"Illegal constructions must be brought down for things to come back to normal in Notre-Dame-des-Landes," Interior Minister Gerard Collomb told Europe 1 radio.

Plans for a "Great West" trans-Atlantic gateway to France and Europe were first considered in the 1960s and the Notre-Dame-des-Landes site was identified in 1967, but the project stalled until being revived in 2000.

Supporters of the airport plan, designed to handle 4 million passengers a year initially, said it would have helped economic development in the Loire-Atlantique region. An old, inner-city airport 30 km (20 miles) to the south was congested and a security risk, they said.

But opponents said it was too costly, environmentally damaging and that there was another under-utilized airport 110 km (70 miles) to the north, near Rennes in Brittany.

Construction giant Vinci has said it is ready to discuss government compensation for the loss of its contract to develop Notre-Dame-des-Landes.