Azerbaijan's Aliyev re-elected president with over 80 pct of vote 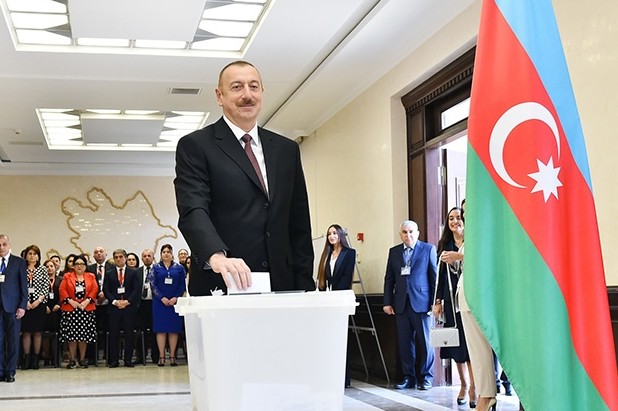 Azerbaijan's President Ilham Aliyev on Wednesday secured a fourth consecutive term in a snap election boycotted by the main opposition parties, according to two exit polls.

The private French pollster, Opinion Way, said he garnered 86.5 percent of the vote.

Aliyev, who cast his vote with his family at a polling location in the capital, Baku, has positioned himself as a guarantor of prosperity in the oil-rich nation on the Caspian Sea.

The election had been planned for October, but was moved up to April, a maneuver that representatives of the political opposition have decried as discriminatory against them. Officials said the move was made because the country would be busy with various high-profile events in late 2018.

The former Soviet republic's huge energy reserves and its strategic location along the Caspian Sea mean it is viewed by Europe as an important alternative to Russia for energy supplies.

Aliyev has tried to strike a balance between big regional power Russia, Azerbaijan's former Soviet master, and the West, notably on energy policy.

His rule has benefited from an economic boom fueled by oil exports but a slump in global crude prices in the last three years has weakened the Azeri currency and shrunk the economy.

Aliyev has led the country since 2003, when he succeeded his father. Surveys put support for him at over 80 percent.

Since Aliyev won the last election in 2013, Azerbaijan's Constitution has been amended to extend the presidential term from five to seven years.

There are 5.2 million eligible voters in the country of 9 million people. The president is directly elected by an absolute majority of votes cast, with no turnout requirement.