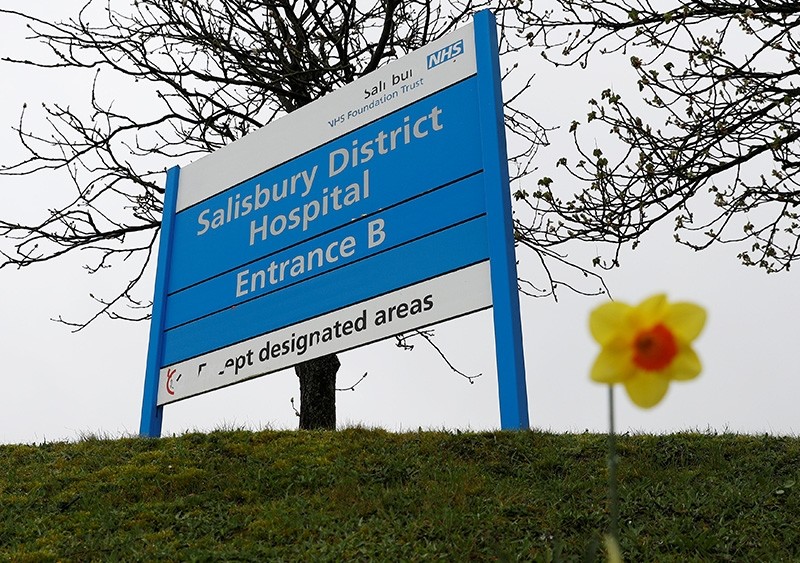 A sign outside Salisbury District Hospital is seen after Yulia Skripal was discharged, in Salisbury, Britain, April 10, 2018. (Reuters Photo)
by Associated Press Apr 11, 2018 12:00 am

Footage posted online by British newspapers showed a reporter from the REN TV network walking along corridors at Salisbury District Hospital early Wednesday and commenting on the apparent lack of security.

The hospital said in a statement that "this footage shows appalling behavior on the part of these Russian journalists — approaching staff in the middle of the night with no warning and without asking for any permission."

It said "any attempt to harass, intimidate or cause distress to any of our staff or patients is absolutely unacceptable and will not be tolerated."

The Wiltshire Police force said officers "attended and spoke to two men in the reception area, who were believed to be news reporters. They were asked to leave the hospital and did so. No arrests were made."

Sergei Skripal, a former Russian intelligence agent convicted of spying for Britain, has been a patient at the Salisbury hospital since he and his daughter were found unconscious in the southwest England city on March 4.

Britain alleges they were poisoned with a Soviet-developed nerve agent, and blames Russia. Russia denies involvement in the pair's poisoning, which triggered a diplomatic crisis between Moscow and the West.

The hospital announced Tuesday that the ex-spy's 33-year-old daughter, Yulia Skripal, has been discharged. She has been moved to an undisclosed location.

Russia has accused Britain of refusing to share information about the case and has demanded consular access to Yulia Skripal, who is a Russian citizen. Her father was given British citizenship after coming to the U.K. in 2010 as part of a spy swap.

Russia's embassy in London said it would "demand to meet with Yulia and Sergei Skripal, whose situation ever more resembles forced captivity or deprivation of freedom."