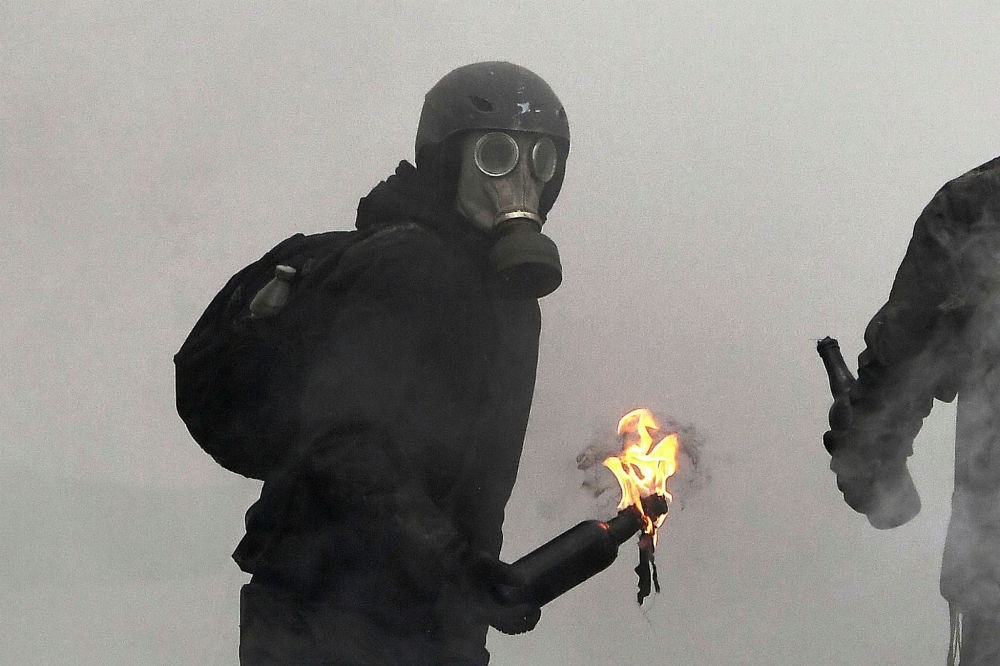 An anarchist protester throws a Molotov cocktail as clashes erupt during the Gendarmerie operation to raze the squat camp at Notre-Dame-des-Landes, April 10.
by Apr 12, 2018 12:00 am

Clashes with tear gas and Molotov cocktails broke out before dawn at an anarchist and vehemently anti-capitalist camp in western France on Wednesday as police battled for a third day to clear the squatters who first set up their camp a decade ago.

Some 70 protesters were lobbing projectiles and Molotovs at police from behind barricades set up to defend the camp at Notre-Dames-des-Landes near the city of Nantes, met with volleys of tear gas and rubber grenades.

Activists opposed to plans to build an airport first began squatting on the farmland in 2008 and it had since grown into a sprawling 1,600-hectare (4,000-acre) settlement billed as a supposed 'utopian leftist farming community.'

The government announced in January that it was calling off plans for the airport and warned the squatters that they must clear off the land by spring, however despite their original goal being achieved, the anarchists decided to keep squatting.

The three days of running battles between some 2,500 police officers and the protesters, armed with Molotov cocktails, are a re-run of a failed attempt to clear the camp in 2012.

The activists have called on supporters from further afield to come and defend the squatting camp, furious at police damage to their shelters and farming projects including a sheep shed and cheese-making area.

The government had said activists could stay on the land if they came up with individual farming schemes but most refused, saying they want to run the site collectively and be able to pursue non-agricultural projects.

The protesters claim around 30 of them has been injured in the clashes.

On the police's side, 14 have been hurt, according to the interior ministry - four of them suffering breathing problems after a tear gas canister went off by accident. One officer was shot in the eye but is not facing life-threatening injuries despite his permanent disfigurement and life-altering injury.

Local authorities say 16 of the encampments dotting the farmland were cleared in the first two days of the operation, 15 of them demolished.

The plan is to dismantle up to 40 as authorities seek to retake control of a key road running through the area that has been blocked for five years by the uncooperative anarchist squatters.