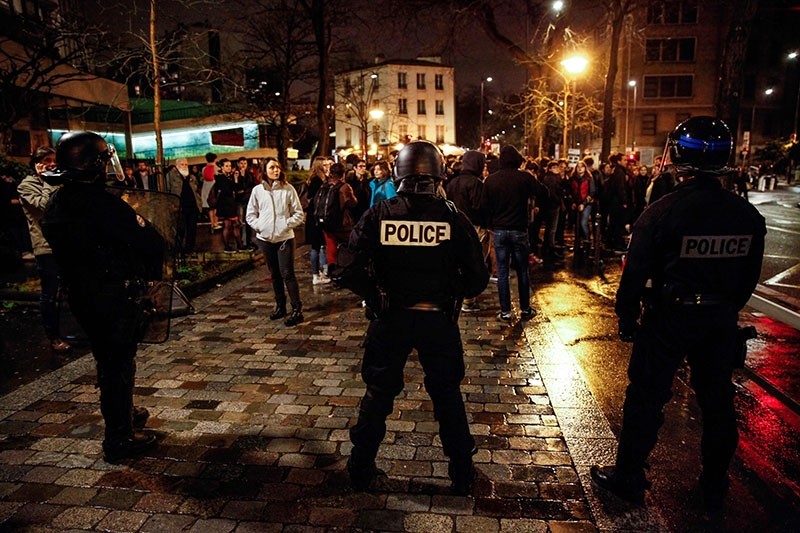 French police confront students as they try to evacuate them from the Tolbiac campus, part of the prestigious Sorbonne University in Paris on April 12, 2018. (AFP Photo)
by Apr 13, 2018 12:00 am

French police have cleared out protesting students at the Sorbonne University in Paris who were threatening to take over the famed campus as part of nation-wide demonstrations against higher education reforms.

Police moved in late on Thursday night at the request of its chancellor after a group of students voted to occupy the university in central Paris in an echo of the momentous student-led protests of 1968.

Many students and trade union movements have invoked the spirit of those mass demonstrations 50 years ago in their bid to rally opposition to centrist President Emmanuel Macron.

"The evacuation which involved 191 people happened calmly and without any incident," a statement from Paris police said.

The university announced its iconic Left Bank site is closed Friday for security reasons after the Thursday night police operation. While about 200 students were evacuated, a few hundred others gathered outside, chanting angrily at police, though the incident ended peacefully.

Students began occupying a handful of universities in March over higher education reforms introduced by Macron that give public universities the power to set admission criteria and rank applicants.

Some students and leftist political opponents have criticized the move as a violation of the principle of free education for all.

French students who pass their school-leaving exams can currently enroll in any university course they choose, a situation blamed by the government for overcrowding and the failure of 60 percent of students to complete their degree within four years.

According to the education ministry, four entire universities are blocked or closed, raising concerns for students who must sit year-end exams in the next few months.

Eleven faculties elsewhere have been disrupted or blocked.

France's Higher Education Minister Frederique Vidal said on Friday morning that "university heads have extremely difficult work to do and they are under extreme pressure".

Macron played down the disruption during an interview on Thursday during which he took a hardline on students who he said risked failing their exams if they continued.

"There are very few universities that are closed," he said. "I notice that in a lot of the blocked universities, they aren't students but professional agitators, professionals in chaos."

"Students if they want to pass their year-end exams, it's a good idea to revise because there aren't any chocolate-box exams in the Republic," he warned.

Students at Nanterre University west of Paris, another cradle of student protests in 1968, have demanded that education authorities grant them an average of 15/20 for the last semester despite the disruption.

Government spokesman Benjamin Griveaux told France 2 television on Friday that "a lot of the occupiers in these universities have not been students for long (and) are in a political fight... often linked to the far left."

Meanwhile, rail workers resumed a strike Friday that is halting about two-thirds of trains around the country.