British PM May faces backlash from opposition over Syria strikes 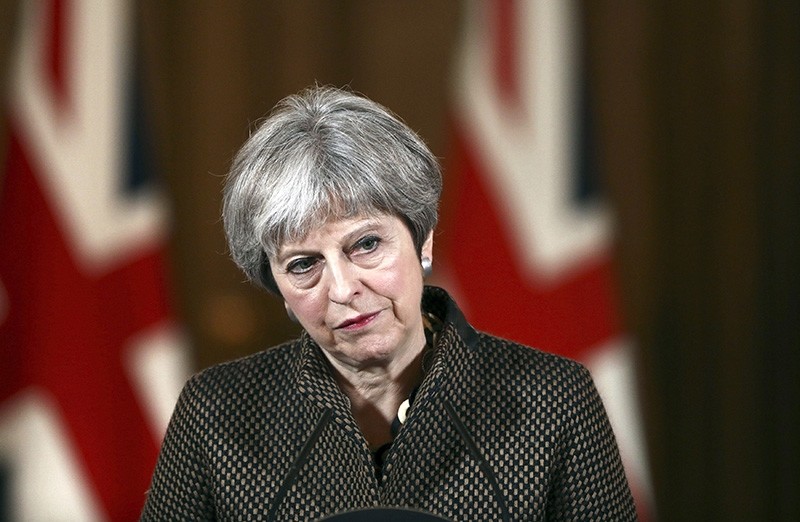 British Prime Minister Theresa May faced a backlash from the domestic opposition after launching military strikes Saturday on Syria without consulting parliament.

As the Conservative leader explained her rationale for the airstrikes, opposition parties claimed the attacks were legally dubious, risked escalating conflict and should have been approved by lawmakers.

The shadow of the 2003 invasion of Iraq still lingers in the corridors of Britain's parliament, when MPs backed then-prime minister Tony Blair in joining U.S. military action.

"Theresa May should have sought parliamentary approval, not trailed after Donald Trump."

Corbyn later wrote to May seeking assurance that there would be no further bombing raids and urged the government to negotiate a pause in the Syrian civil war.

Stop the War, a pacifist coalition once chaired by Corbyn, has called a demonstration outside the British parliament on Monday to protest about the strikes.

The group said it "strongly condemned" the action and accused May of "sanctioning killing" at U.S. President Donald Trump's behest.

Often when the British government decides on military action, the opposition offers its full support. However, that has been less the case in recent years.

British MPs voted down taking military action against Damascus in 2013, in what was widely viewed as an assertion of parliamentary sovereignty on the use of force.

David Cameron, who was prime minister in 2013, tweeted on Saturday: "As we have seen in the past, inaction has its consequences".

Lawmakers backed action in Iraq in 2014, and again in Syria in 2015, strictly limiting strikes in both countries to targets of the Daesh terror group.

The rush to action following an alleged chemical weapons attack on the oppositon-held town of Douma on April 7 was condemned by several British opposition parties who wanted parliament recalled.

It returns from its break on Monday, when May will face MPs' questions on the strikes.

Deploying the armed forces is a prerogative power, meaning the prime minister can launch action without backing from MPs.

But after the Conservatives entered office in 2010, the government suggested that since the 2003 vote on Iraq, a convention had emerged that MPs should have a say, except in cases of emergency.

In attacks alongside U.S. and French allies on Saturday, four British Tornado jets fired Storm Shadow missiles at a Syrian military base suspected of holding chemical weapons components. The strikes at 0100 GMT were 15 miles (24 kilometers) west of Homs.

Scottish First Minister Nicola Sturgeon said the Assad regime's use of chemical weapons could not be tolerated but questioned whether the strikes would halt their use or contribute to ending the civil war.

"This action risks not just further escalating the civil war in Syria but also a dangerous escalation of international tensions," said the leader of the left-wing Scottish National Party, the third-biggest force in the British parliament.

Vince Cable, leader of the Liberal Democrats, the fourth-biggest party in parliament, accused May of "riding the coat-tails of an erratic US president."

"It shows a weak government putting short term political expediency before democracy and in so doing further diminishing the standing of Britain in the world," Cable said.

The Green Party, which has one MP, said May had "trampled over parliamentary democracy" and demanded a vote in the House of Commons on the strikes.

However, there was some support for May.

The center-right Conservatives rely on the support of the Democratic Unionist Party, Northern Ireland's biggest party, for a majority in parliament.

DUP leader Arlene Foster said the airstrikes were "limited but proportionate and justified".

Tom Tugendhat, the Conservative chairman of parliament's foreign affairs scrutiny committee and a former army officer, said May had "taken the correct decision".

Peter Felstead, editor of Jane's Defence Weekly, said he did not think May would face a "serious backlash", as the strikes ultimately were politically and operationally "the right thing to do".

"Corbyn will rail against military action, claiming it could widen the conflict, but if he won't sanction military action against a regime that is using chemical weapons on its own people, when would he ever sanction it?" he told AFP.

"If the West had acted against Assad's chemical weapons attacks in 2013, we might not have had to embark on military action now."