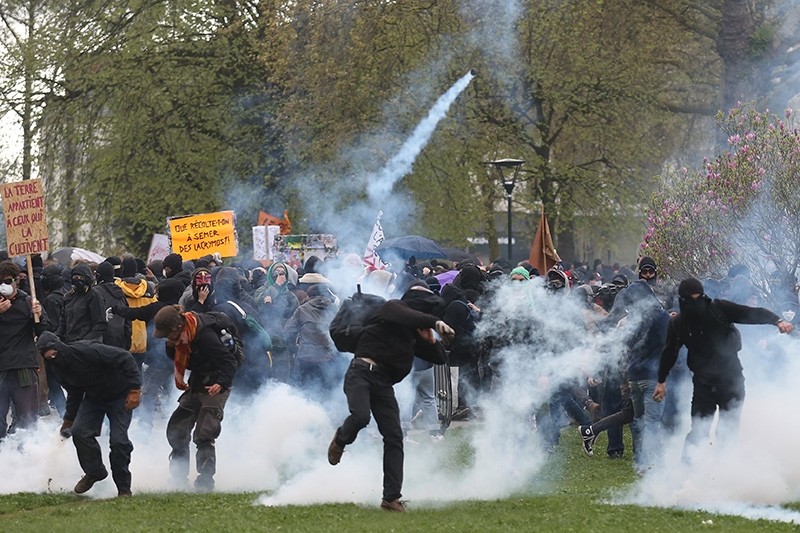 A protester throws a projectile during clashes with police at a demonstration in support of the Notre-Dame-des-Landes ZAD (Zone a Defendre - Zone to defend) anti-airport camp on April 14, 2018, in Nantes (EPA Photo)
by Compiled from Wire Services Apr 15, 2018 12:00 am

Nine French police officers were injured in clashes with people protesting government policy late Saturday in the cities of Montpelier and Nantes, prompting the country's interior minister to denounce the "unprecedented acts of violence."

French authorities say 63 people have been arrested during protests.

Interior Minister Gerard Collomb denounced the violence and damage to stores and public buildings at the edges of Saturday's protests.

Collomb called for calm as another protest is planned Sunday at Notre-Dame-des-Landes in western France.

Franceinfo reported that a group of ultra-left protesters clashed with police in the southern city of Montpelier after an anti-government demonstration.

Meanwhile, in Nantes, a protest that started when people demonstrated against an action to clear a group of left-wing protesters from a property escalated to the point where objects were being thrown at officers, the police reported on Twitter.

A force of 2,500 officers was called out this week to clear the building north-west of Nantes, which had been occupied for years, originally as a protest against an airport project, plans for which were dropped in January. During the initial clearance effort, petrol bombs were flung at officers.