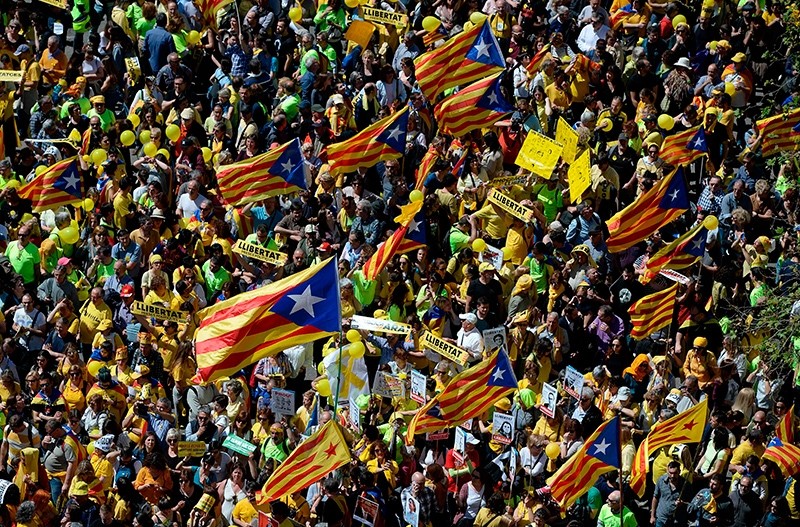 People wave Catalan pro-independence 'estelada' flags during a demonstration to support jailed Catalan leaders and politicians a in Barcelona, Spain, April 15, 2018. (AFP Photo)
by Compiled from Wire Services Apr 15, 2018 12:00 am

Hundreds of thousands of people rallied in downtown Barcelona on Sunday to demand the release of high-profile secessionist Catalan leaders being held in pre-trial detention.

Chanting "Freedom for the political prisoners," they marched along Parallel Avenue, a main thoroughfare, many waving the red-and-yellow Catalan flag.

The protest comes six months after the first incarcerations of top Catalan separatist leaders for misuse of public funds, sedition and rebellion -- which carries a prison sentence of 30 years and implies that a "violent uprising" took place -- over their separatist push.

"Since they could not decapitate separatism, they are trying to do it through the courts," Roser Urgelles, a 59-year-old teacher, told AFP at the protest.

"They need to demonstrate that there was violence to execute the sentences that they want, so they invent it," she said, adding: "But we will continue to protest peacefully."

Like thousands of others at the march, she wore a yellow ribbon to show solidarity with the jailed leaders, whom Catalan separatists consider to be "political prisoners."

Spain's justice minister, Rafael Catala, has called the use of yellow ribbons "insulting," arguing that Spain has no political prisoners but "politicians in prison".

The demonstration was organized by two grassroots independence groups, the ANC and Omnium, whose presidents are among the nine separatist leaders in prison awaiting trial over their role in last year's failed breakaway bid by Catalonia.

A total of 957 buses brought protesters from across the wealthy northeastern region of Spain to Barcelona, the Catalan capital, for the march, the ANC said in a statement.

The protest was backed by the Catalan branches of Spain's two largest trade unions, the CCOO and the UGT, sparking unease among union members who oppose independence.

"There have been tensions [among unions members] just like in the rest of the Catalan society," the secretary general of the Catalan branch of UGT, Camil Ros, told AFP.

"But it is not a separatist protest. It is time to build bridges and the Catalan problem cannot be solved through the courts but by dialogue and politics."

The demonstration comes ten days after a German court dismissed an extradition request for Catalonia's ousted separatist president Carles Puigdemont on grounds of rebellion and released him on bail.

Spanish prosecutors last week handed over new information to Germany they hope will prove the use of violence which would justify the rebellion charge against Puigdemont and their extradition request.

Puigdemont is also accused of misuse of public funds for staging an independence referendum in Catalonia on Oct. 1 despite it having been ruled unconstitutional by the courts.

Alex de Ferrer, a 50-year-old IT specialist, said he`planned to take part in the protest because jailing separatist leaders "only serves to manufacture separatists."

The independence movement is "a bit decapitated" following the arrests of its leaders but "this is temporary," added de Ferrer, who supports leftist separatist party ERC, whose leader Oriol Junqueras is in jail.

The secession movement in the wealthy region has plunged Spain into its deepest institutional crisis in decades.

Separatist lawmakers defied court orders and held an ad-hoc referendum on independence in October. Their subsequent declaration of independence for the region led to a crackdown by Spanish authorities acting to defend the Spanish Constitution, which declares the nation "indivisible."

Pro-independence parties retained a slim majority in Catalonia's parliament after an election in December, but courts have blocked their attempts to elect as regional chief any lawmaker who is either behind bars or has fled the country.

Seven other Catalan separatist leaders are in jail in Spain while they await trial for rebellion, along with the two leaders of the grassroots separatist groups.

The latest opinion poll published by the Catalan government in February said that support for independence had decreased to 40 percent from near 49 percent in October. The poll surveyed 1,200 people and had a margin of error of 2.8 percent.

Fresh regional elections will be triggered if a new leader is not elected by May 22.

In a letter sent from prison, former Catalan vice president Oriol Junqueras said that immediately forming a government was "a necessity" so that Catalonia could regain its political autonomy.