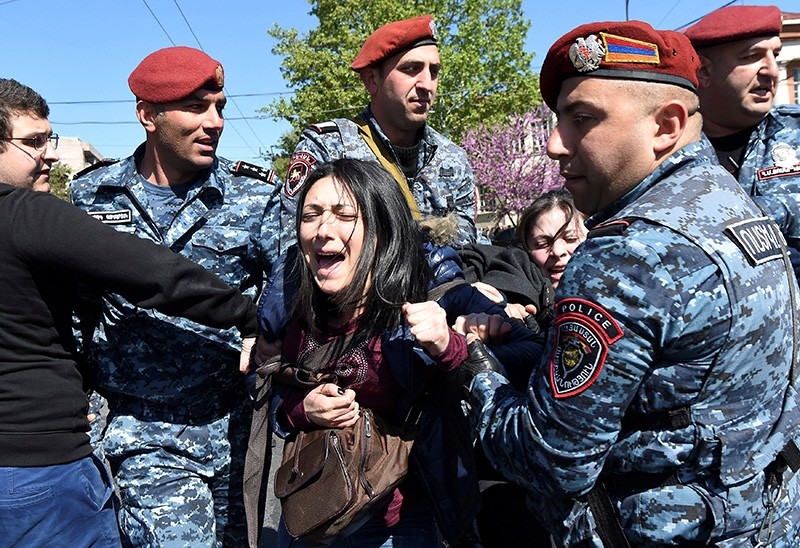 A demonstrator is detained by police during a protest against Armenia's ruling Republican party's nomination of former President Serzh Sarksyan as its candidate for prime minister, in Yerevan, Armenia (Reuters Photo)
by Daily Sabah with DPA Apr 17, 2018 12:00 am

Eighty protesters were detained Tuesday during a rally in the Armenian capital Yerevan against former President Serzh Sargsyan becoming prime minister, while an opposition leader of the protest claimed to launch a nationwide "velvet revolution."

"I proclaim today the start of a peaceful velvet revolution in Armenia," opposition leader Nikol Pashinian told a rally in Yerevan, calling on supporters to "paralyze the work of all government agencies," as reported by Agence France-Presse (AFP).

Protesters blockaded the entrances to government buildings housing the foreign ministry and the central bank, among others, and rallies were also held in the provincial towns of Gyumri and Vanadzor. The protesters vandalized government property, including deflating the tires of official vehicles, state media reported. Authorities earlier said that only several protesters were detained.

The opposition says the new parliamentary system of government will allow Sargsyan to maintain a huge influence and extend his time in power. Sargsyan left the presidency this year upon reaching his term limit. Opposition members have decried changes to the constitution that will increase the incoming prime minister's powers.

"I am standing here today as a leader of the party which can ensure a harmonious cooperation between the executive and legislative branches of power," he told lawmakers ahead of the vote.

The ruling Republican party nominated Sargsyan, who served as president for a decade from 2008, as its candidate for prime minister on Saturday.

Sargsyan's ally Armen Sarkissian, a former prime minister and ambassador to Britain, was sworn in as president last week after being elected by parliament in a vote that was meant to herald the start of a power shift to the premier and parliament.

Under the terms of an amended constitution approved in 2015 by a referendum, the presidency will become largely ceremonial.

The Dashnaktsutyun Party, the Republicans' coalition ally, also backs Sargsyan's candidacy, meaning he should easily secure the simple majority needed for election. No other candidates are running. Sargsyan had denied any intention of becoming premier until March, when he said his appointment would allow him to share the benefit of his experience as president.

Armenia, a country of 3 million people in the Southern Caucasus, seceded in 1991 from the then Soviet Union but still relies on Russia for aid and investment. Many Armenians accuse the government of corruption and mismanaging the economy.