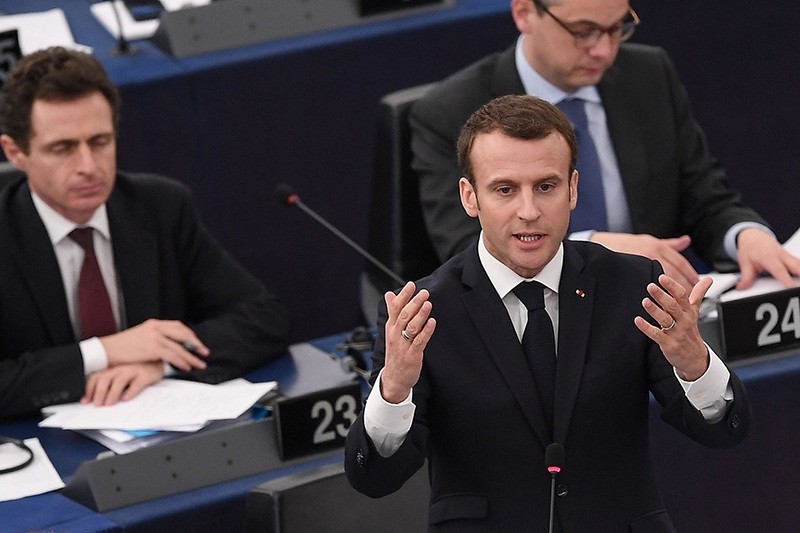 rench President Emmanuel Macron speaks before the European Parliament on April 17, 2018 in the eastern French city of Strasbourg (AFP Photo)
by Apr 17, 2018 12:00 am

French President Emmanuel Macron warned on Tuesday that divisions between democracy and authoritarianism in Europe were becoming like a "civil war."

In a speech to the European Parliament in Strasbourg that set out his vision of a reformed EU, Macron called on the bloc to resist the siren song of populism.

The young French leader's call to arms comes after eurosceptic populists won elections in Hungary and Italy, and as Brussels confronts Poland's right-wing government over the rule of law.

"There seems to be a sort of European civil war, where our differences and sometimes our national egotisms can seem more important than presenting a united face to the world," the 40-year-old president said.

"There is a fascination with the illiberal and it's growing all the time."

Macron's election victory last year against far-right candidate Marine Le Pen and his ardent pro-Europeanism have made him the poster boy for those aiming for a revived post-Brexit EU to battle the challenges of populism.

Macron said he was concerned by the growing sense of "doubt" in several European countries in the wake of the shock 2016 Brexit vote, which he said was creating divisions in the EU.

"I want to belong to a generation that will defend European sovereignty because we fought to obtain it. And I will not give in to any kind of fixation on authoritarianism," he added.

Macron's words were welcomed by European Commission chief Jean-Claude Juncker, who told parliament afterward: "The true France is back."

The French president also launched into a spirited defense of his decision to launch airstrikes alongside Britain and the United States against alleged regime chemical weapons sites in Syria.

"Three countries have intervened, and let me be quite frank, quite honest -- this is for the honor of the international community," said Macron, who earlier this week said he had persuaded Donald Trump to keep U.S. troops in Syria.

"These strikes don't necessarily resolve anything but I think they were important," he said.

In terms of his European reforms, Macron has struggled to win support across Europe for all his proposals.

His speech to MEPs is part of a charm offensive ahead of European Parliament elections in May 2019, the first after Britain's scheduled departure from the EU.

Later this week Macron will travel to Berlin for talks with German Chancellor Angela Merkel to try to boost flagging support for his plans for the future of the eurozone.

Macron said that France was ready to increase its contribution to the EU's first post-Brexit multiyear budget, which begins in 2020.

Any reforms have to be "in the European and in the German interest," CDU secretary-general Annegret Kramp-Karrenbauer told reporters.

Macron separately proposed on Tuesday to create a European fund for communities that take in refugees in a bid to tackle one of the most politically toxic issues facing the EU.

EU leaders are set to adopt preliminary Macron-backed plans for eurozone reforms and for an overhaul of its troubled asylum system in June, but there is still a lot of work to do.

Fighting to push through reforms at home in the face of mass rail strikes, Macron also faced difficulties in the European Parliament, where his domestic En Marche party is not affiliated to any political group.

Merkel is due to address the European Parliament in November, officials said on Monday.

She made a joint speech with then-French president Francois Hollande in Strasbourg in 2015 in which they urged unity in the face of the migrant crisis.