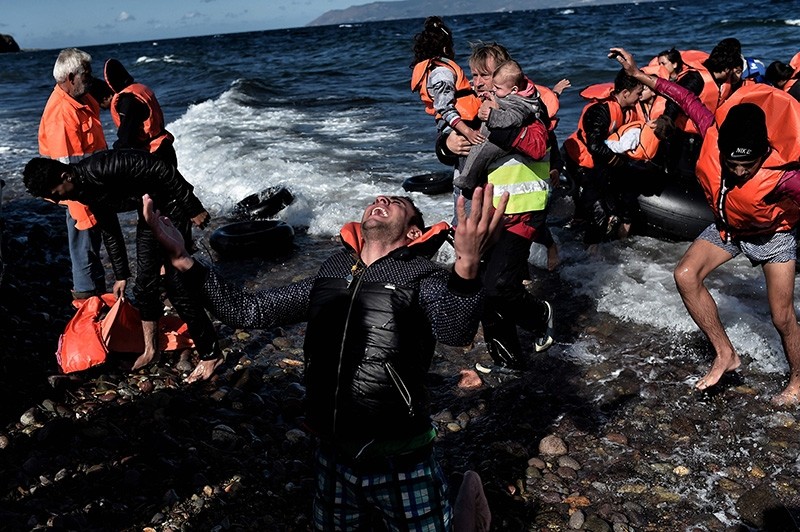 This file photo taken on October 29, 2015 shows a man reacting as he arrives, with other refugees and migrants, on the Greek island of Lesbos after crossing the Aegean sea from Turkey. (AFP Photo)
by Apr 18, 2018 12:00 am

A top Greek court ruled on Wednesday that migrants landing on Greek islands should no longer be held there while asylum claims are assessed, a decision raising alarm among EU officials in Brussels.

The prospect of new arrivals, often fleeing violence in the Middle East via Turkey, being able to quickly reach mainland Europe from the islands could undermine EU efforts to discourage people leaving Turkey.

An EU official described the ruling as a "big worry".

Stopping migrants making the short crossing from Turkey is a key part of European Union policy aimed at avoiding a repeat of the crisis of 2015 when over a million migrants, many of them Syrian refugees, made it to Germany.

Asylum-seekers have been prohibited from traveling beyond five Greek islands since March 2016, when the EU agreed a deal with Ankara to seal the sea route, offering cash to improve conditions for Syrians staying in non-EU member Turkey.

The restriction on leaving the islands, imposed by Greece's Asylum Service, has resulted in severely overcrowded camps and violent protests over delays in asylum decisions. More than 15,000 asylum-seekers are living in five island camps, more than double their capacity, according to government data.

The Council of State, Greece's top administrative court, annulled the decision. It found no "serious and overriding reasons of public interest and migration policy to justify the imposition of restriction on movement", a court official said.

The ruling, effective immediately, applies to new arrivals only and not to asylum-seekers who are already on the islands.

The EU's executive said it was aware of the ruling but not yet familiar with the details: "It is in any case for the Greek authorities to study and analyze the implications of this decision," a spokeswoman for the Commission said.

Greece's Migration Ministry said it too would study the court's decision and that there was a provision "regulating the matter" in a bill which has been sent to parliament.

Although the number of migrants and refugees crossing the stretch between the Turkish coast and the islands remains well below 2015 levels, arrivals are up 27 percent this year compared with the same period in 2017, U.N. data shows.

Judges noted the islands had to manage a significant number of people seeking international protection while dealing with Greece's financial crisis. There were also risks of social tensions that could hurt the local economy because the islands are also tourist destinations.

The Greek Council for Refugees, which had taken the issue to court, said the decision was a "an important victory for all those who defend the rights of refugees".